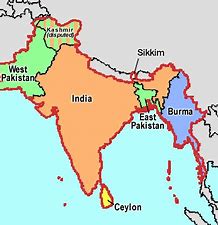 If you’re looking for a brief (650ish) words) summary on a topic in history you’re in the right place! You can find reading passages for U.S. History and World History topics and can download a PDF copy for yourself. If you need a digital copy there is a Google link provided as well.

European countries for hundreds of years had economic and political power over people in the Americas, Africa and Asia. Their power over American colonies generally ended by the late 19th Century.  Events after World War II would lead to the decolonization of many African and Asian areas as well.

Great Britain deemed India as the “Jewel in the Crown” of a world empire, control arising back in the 17th Century with the British East India Company.

Since then, independence was won in the U.S. and Canada and Australia were basically granted independence, being given the power of self-government.   In the late 19th Century, the Indian National Congress was formed and demands for local self-government grew as well.

Helped by the non-violent resistance of Gandhi, independence was granted in 1947.  British India was partitioned, divided, into two nations — India (Hindu majority) and Pakistan (Muslim majority).

The end of each world war included efforts in support of self-determination, the right of local self-government.  Egypt won independence from Great Britain after World War I.  Italy gave up control of Libya as part of their surrender terms after World War II.  The Pan-African Congress also was formed, bringing together political and intellectual African leaders, in support of African interests as a whole.

The burdens of World War II made it harder for European nations to hold on to their overseas empires.  Despite the challenges France did not want to give up control of Algeria in Northern Africa and their possessions in Indochina (Cambodia, Laos and Vietnam).  Both areas eventually obtained their independence after extended violent conflicts.  Vietnam was divided into two and conflict would continue into the 1970s.

The “scramble for Africa” in the late 19th Century was particularly focused in Central Africa and often involved bloody conflict to obtain European control of the areas.  Traditional borders were often not respected, and the local peoples were harshly treated.

This later led to some particularly ugly battles for independence as well as unstable and/or dictatorial regimes which continued to cause deep problems for the African people.  Problems lingering to this day.

As in Algeria, independence movements in this region repeatedly included guerilla actions, unauthorized warfare involving sabotage and other means to attack official powers, often harming civilians in the process.

In the 1950s, for instance, the Mau Mau Uprising arose in British Kenya (East Africa).  Jomo Kenyatta, a leader in the uprising, later became the first president of Kenya. The Belgian Congo (Central Africa) obtained independence more peacefully, but divisions soon arose, including the assassination of Patrice Lumumba, the first leader of the new country.

South Africa was provided some form of self-government by Great Britain as early as the opening years of  the 20th Century, but true democracy for the local black majority would only come in the 1990s.  Before then, a system of racial apartheid (separation) and white rule was in place.

Former colonial powers, including the United States, often retained a large amount of control over now independent nations by various means, including economic and military.

This “neocolonialism,” a new form of colonialism, was particularly obtained when new African nations relied on other countries for markets of their goods and fell deeply into debt to other nations. Military power also could be used to control other nations, even invasions if a nation acted in the “wrong” way.