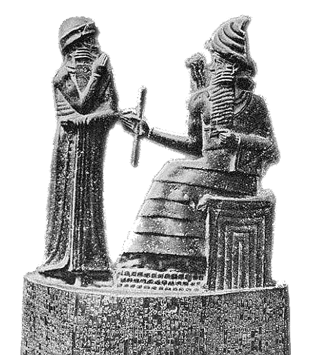 The United States Supreme Court honors “great lawgivers of history” (to quote the sculptor) in a series of marble carvings in its courtroom. They include a range of historical figures from Moses to Napoleon. The second figure portrayed is Hammurabi, who founded a great empire but is remembered today as a lawgiver.

Hammurabi (meaning “Great Family”) was born in 1810 BCE, a prince of the city-state of Babylon, then a small kingdom now found in modern day Iraq.
Hammurabi became king at eighteen when his father died and worked to improve his kingdom. He strengthened the city walls, improved the city’s irrigation system and built new temples to the gods.  Hammurabi then looked outward and defeated surrounding kingdoms to form a wider Babylonian Empire.

King Hammurabi looked to improve the new lands he controlled and more firmly establish his control.  A basic part of doing this, which was also the case when the United States was established, was clearly putting in place a system (code) of laws.  Law provides a basic set of rules and regulations that allow for the smooth running of government and society. And, previous Mesopotamia (ancient civilization found around modern day Iraq and surrounding areas)  kingdoms also had law codes.
The Hammurabi Code itself was a list of nearly three hundred laws involving a range of topics including homicide, assault, divorce, debt, adoption, tradesman’s fees, agricultural practices and even disputes regarding the brewing of beer.

The Code of Hammurabi begins with a long blessing of King Hammurabi, cited as being authorized by the gods and a leader of great acclaim. Perhaps, we can compare this to the U.S. Constitution, authorized by “We the People.”
After the laws are listed, the code also proclaims Hammurabi was righteous and just, instructing future rulers: “if a ruler have wisdom, and be able to keep his land in order, he shall observe the words which I have written.”  This reflects what we know of King Hammurabi, someone who not only organized great construction projects, but also was concerned about being a good leader to his people.

The laws to the modern eye are a mixture of fair, curious and harsh. For instance, we are told that: “if any one brings an accusation of any crime before the elders, and does not prove what he has charged, he shall, if it be a capital offense charged, be put to death.”  This harsh justice is symbolized by the saying “eye for an eye,” which treats like for like, but in a harsh way.  But, note the need for proof (“does not prove”).  We today also care about such due process, basic fairness.

Some laws simply seem curious to our modern eye, though the practices lasted for a long time. For instance, one law requires an “accused go to the river and leap into the river,” and if they sink, it would prove guilt. This sort of test survived into the Middle Ages in European courts.

Other laws showed that the empire was an unequal society, different rules in place for the wealthy, ordinary folks and slaves.  Destroying an eye only led to the loss of your eye, for instance, if the eye harmed was of a wealthy person.  Harm to other people’s eyes only resulted in a fine.

Hammurabi’s code lived on far past the end of the Babylonian Empire itself (in about 1600 BC); it was being copied as late as a thousand years later.  We can read it today in large part because it was written on a large stone monument that was rediscovered in 1901.  The code of Hammurabi not only provides a window into the law of a past civilization, but also (as laws do today) on nature of the times itself.