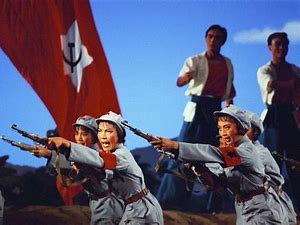 If you’re looking for a brief (650 word) summary on a topic in history you’re in the right place! You can find reading passages for U.S. History and World History topics and can download a PDF copy for yourself. If you need a digital copy there is a Google link provided as well.

The end of the Qing dynasty (1912) led to the Republic Era of China but not stability.  The period that followed was one of divisions and war, internal and external.  The end result was communist control of almost all of China.

Revolutionary Sun Yat-sen became the first President of the Republic of China in 1912, but the fall of the Qing dynasty (rule by emperor) led to a divided China with many areas controlled by local warlords.

After World War I, the communist party, partially inspired by events in Russia, developed.  Mao Zedong became a leader in the movement, early on joining forces with nationalists to unite the country.  In the 1920s, a nationalist general, Chiang Kai-shek led a military campaign defeating the warlords.

Chiang Kai-shek, now a leader of the government, went after communists once defeating the warlords.  This led to a ten year (1927-1936) civil war between the two groups, stopped only when Japan invaded the country. Near the end, the communists had a long retreat (“Long March”) that took a year and was seen as an act of solidarity that cemented Mao Zeodong’s leadership of the communists.

Once Japan was defeated, the civil war started once more, the nationalists with support of the United States and the communists supported by the Soviet Union.  The communists gained control of the capital (Beijing) in 1949, declaring a “People’s Republic of China.”  The nationalists fled from the mainland to the island of Taiwan, still recognized as the true leaders of the country by the United States until 1979.

Mao Zedong now was not only the party chairman but leader of the whole nation with the official ideology known as “Maoism.”  A collection of his sayings were collected in the Little Red Book.  Opposition was crushed.  China also supported the communists during the Korean War, helping the North Korean forces.

As part of a series of moves to modernize China, the Great Leap Forward was announced (1958), a policy of rapid industrial growth and agricultural collectivization.  Collectivization is the uniting of small land holdings into large farms.

Helped by fear of challenging the hierarchy, leading to false reports of success, natural disasters and not being ready for such large changes so quickly, the result was great famine, leading to millions of deaths.

Maoism made a comeback in the 1960s, a social and political “cultural revolution” developing to revive communist ideals. Red Guards, largely made of students, led the way and opponents were suppressed, either killed or sent to farms to be “re-educated” with the right ideology.

Concerns about corruption and weak democratic institutions continue until today, communism mixed with a market economy is a messy fit.