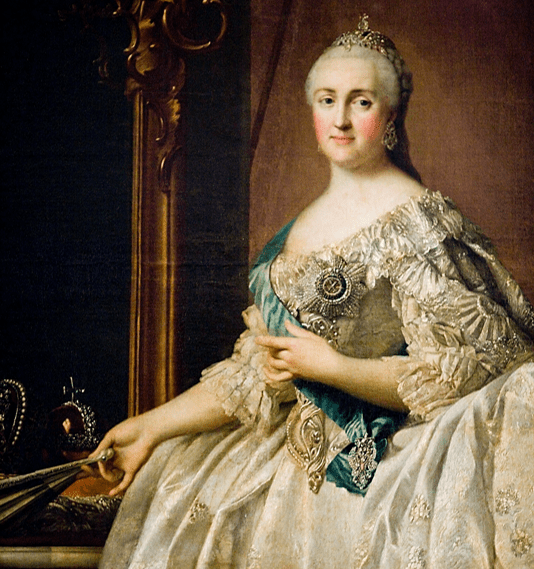 Catherine II, also known as Catherine the Great, was an empress of Russia who ruled from 1762-1796, the longest reign of any female Russian leader.

Is Catherine the Great really great?  Or, is she more meh?  Judging her greatness requires looking at her life and times.  Then, you can decide for yourself.

She was born on May 2, 1729.  Her name was Princess Sophie Friederike Auguste von Anhalt-Zerbst-Dornburg (say that 10 times fast!).  She was minor German royalty, but her family did have helpful connections.

Sophie was something of a tomboy growing up and was not very close to her mother.  Sophie received a traditional education, including learning German, French, and Russian.  She was taught by clergy, but questioned much of what she was taught.

The Russian came into good use when her mom got her an introduction to the Russian royal family.  Empress Elizabeth of Russia was once engaged to Sophie’s uncle.  The saying, “it’s not what you know but” was just as true then and as it is today.

Empress Elizabeth was the daughter of Peter the Great, who basically put Russia on the map in the beginning of the eighteenth century.  Russia was previously a bit of a backwater of Europe.  Catherine would continue this improvement enterprise.

In 1744 Sophie went on a Russian charm offensive, an early example of her people skills. This included asking for a Russian Orthodox priest (over her family’s Lutheran faith) when it looked like she might die.

Sophie had become ill, and submitted to the favored “treatment” of the day, repeated bloodletting. That is exactly what it sounds like, cutting a sick person to get rid of the bad blood.

Sophie survived and got on Elizabeth’s good side, too.  Empress Elizabeth had her eye out for marriage material for her nephew and heir, Peter.  Peter and Sophie married after she turned sixteen.  Sophie in return became Russian Orthodox and took the name “Catherine,” in honor of the empress’ mother.

Sophie and Peter were second cousins and about the same age.  Peter was also German, though was a lot more open about his favoritism, showing disdain for Russia.  They met when she was ten and later Catherine noted that she hated him on sight for his pale skin and fondness for alcohol at such a young age.

Their relationship did not improve with age.  Catherine found him immature and rude.  Peter seemed to wish to embarrass her, openly favoring his mistress.  Catherine had an educated air, concerned with cultural matters Peter cared little about.    The Russian people also found him quite the dud.

As one account notes: “Catherine developed her own pastimes, which included reading extensively.”   The “pastimes” also included having her own lovers, starting her reputation as someone with a very active romantic life.  According to later hints by Catherine herself, a lover was the likely biological father of Catherine’s own heir.

This would later come back to burn Pete; as she wrote:

“Had it been my fate to have a husband whom I could love, I would never have changed towards him.”

Seems to me that she never liked him; but, she eventually did “change” things.

Some historians say that Peter gets a bit of a bad rap, especially when the source of much of his bad press came from Catherine and her supporters.

Still, he had various things going against him: he was very pro-Prussia (a major German power), took land away from the Church (not a great way to get on their good side), and was not as good at political power plays as his wife.  Plus, many just felt he was a dud.  Net result?  Catherine crafted a coup and no one really cared.

Peter was forced to abdicate his throne and soon died under mysterious circumstances.

Catherine was now Catherine II, technically her son Paul’s (under 10) regent (in charge until Paul was old enough to rule).  Really, Catherine reigned until her death over thirty years later, finding ways to push Paul aside by various dodges once he came of age.

Historically, Catherine is particularly known for her love life.  She had twelve “favorites” or lovers.  Count Grigory Orlov, a military officer who helped with the coup, was one.

Another was put in charge of Poland.  Catherine’s enemies made a lot of hay about her love life, especially as she got older and favored younger men.

But, Catherine’s love affairs were very much cultural ones and performed as much through letters as in the bedroom.  Catherine was actually a bit of a prig — when Elisabeth Vigee Le Brun painted her granddaughters, Catherine was horrified that their arms were showing.  Sleeves were added.

The Enlightenment Era (or the Age of Reason) was an intellectual movement of European history in the 17th and 18th centuries emphasizing reason and human development.   Catherine was an enlightenment monarch.

Catherine championed Enlightenment ideals, including proposing a major reform to the legal system.  The reform, however,  did not actually become law.

Russia was still very conservative and undeveloped, perhaps as much as ninety-five percent of the people living as serfs (powerless farmers), a slave-like existence.

There did not seem an opening for great change.  But, Catherine promoted the idea of Russia as a culturally enlightened society.  This improved the country’s image.

She maintained a lot of correspondence with the French Enlightenment philosophers such as Voltaire, promoted the arts, and showed a love for literary and artistic interests.  These were all great things!

Her support of education particularly benefited women, at least aristocratic ones. This includes starting the country’s first state-funded school for women.  Catherine welcomed a woman portrait artist to draw her family.

Catherine also did not just promote science; she took part in it.  Early in her reign, an early form of the smallpox vaccine was invented.  Many were wary about it, since it was a primitive and at times deadly version.  But, she was the first person in Russia to get vaccinated.  By 1800, two million Russians were vaccinated.

Catherine’s enlightened views only went so far. As she once noted: “I am an aristocrat, it is my profession.”  She was no fan of the French Revolution. Like other European monarchs, she was concerned about the revolutionary anti-elite ideals.

The term often used for leaders such as her is “enlightened” or “benevolent” (good) despot.  That is, she had a lot of power, but to some extent at least was nice about it.   Such a leader had an obligation to rule wisely and fairly.

How did she apply this rule in practice?  The term “ymmv” (your mileage may vary) might apply.

In 1790, a writer who attempted to publish a work openly critical of the abuses of serfdom, was tried, condemned to death, then pardoned and exiled.

“write up the petitions shall be punished by the knout (whip) and forthwith deported to Nerchinsk to penal servitude for life.”

Catherine’s failure to address the horrible conditions of the serfs, while previously saying she was open to ending serfdom, led to a major and bloody rebellion.

It and other rebellions were put down, but it showed the limits of good feelings during her reign.  The “Russian Golden Age” was not so golden for much of the country.  But, things did not as a whole get worse for them either.

During her reign, Catherine extended by some 520,000 square kilometres (200,000 sq mi) the borders of the Russian Empire.  This added to her “greatness,” but also came at a great cost to the conquered nations and her own country alike.

Near the end of her reign, Catherine put down a rebellion in Poland (led by American Revolution hero, Thaddeus Kościuszko), and ended its existence as a nation until after World World I.  As you recall, a former lover was in charge of Poland — he was still there at this time.  He left Poland on Catherine’s demand.

Shortly after these events, in late 1796, Catherine died of a stroke.  Her son, Paul, became emperor, but was assassinated within five years. He did last a bit longer than his “father.”

So, how does she rank?  Various things should be used to decide “great” or “meh.”

Consider her complete biography.  From humble beginnings of minor nobility  she rose to lead a great empire and did so for decades.  Consider the various roadblocks she had to address.  Which did she overcome?

Take into account her personality and abilities.  Compare them with others, including her husband.  Consider her being a woman, in an age more sexist than our own.

What did she accomplish in her rule?  Were there mitigating (reasons that helped explain) grounds for her not to do more?  Who benefited?  Who did not?

Add in anything else that is (reasonably!) relevant in deciding the answer.

Great or Meh? You decide!