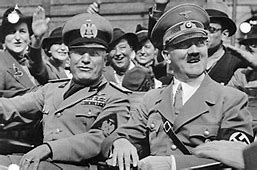 The twenty year period between the two world wars was filled with activity. In hindsight, it might seem that a second world war was inevitable, but that is not how the average person at the time saw it. They handled current events as they came.

The cease of fighting at the end of World War I (armistice) led to peace talks. Germany had to give up territory in Europe and Africa.  The Austria-Hungary empire broke apart.  And, several new independent countries were formed including Poland, Finland, Yugoslavia, and Czechoslovakia. The Ottoman Empire also broke apart, some parts coming under European control, Turkey becoming independent.  Meanwhile, via the Russian Revolution, Russia became the Soviet Union.

The League of Nations, an international organization of governments to settle disputes peacefully, was established as part of the peace process. The United States never joined, part of its isolationism from world affairs.  Many in the United States and European nations wanted to avoid another deadly international conflict.  Isolationism and appeasement, giving into demands that might be unfair or problematic to prevent conflict, were two means of doing so.

Germany after the war formed the Weimar Republic, but it had a troubled existence. Many thought Germany only lost because of traitorous behavior supported by the new government.  The peace terms, including reparations paid to the victors, were seen as too harsh. Economic difficulties, including the experiences arising out of a worldwide Great Depression (economic downturn), worsened the situation.  A lasting stable democracy did not have time to develop.

Economic difficulties helped lead to the growth of fascism, government by dictator with the rights of the people threatened in a variety of ways, an “us vs. them” nationalistic and militaristic mentality arising.  An alternative approach also arose in some places, including the United States, using more benign reforms.  There was also a push to use communistic approaches. The model cited internationally here was the Soviet Union, itself now under fascist control led by Joseph Stalin.

A nationalistic political party that used Jews as scapegoats (antisemitism) known as the Nazi Party gained control in Germany with Adolf Hitler eventually becoming the Führer (leader). Anti-Jewish policies grew both officially and unofficially, including Kristallnacht (the Night of Broken Glass), an organized anti-Jewish attack.

Fascists also gained control in Italy (Mussolini) and Spain (Franco), Franco’s forces gaining full control after winning the Spanish Civil War in the 1930s.  Japan’s leadership also grew more fascist, including seizing Manchuria from China, and after winning control of Nanking, being guilty of many heinous atrocities there.

The Munich Agreement (allowing Germany to annex a German populated portion of Czechoslovakia known as the Sudetenland) was not enough to appease them. After forming a non-aggression pact with the Soviet Union, who had its own imperialist aims, Germany invaded Poland in September 1939.  Meanwhile, Japan pressed its own expansionist campaigns in China and the Pacific.  World War II had begun.