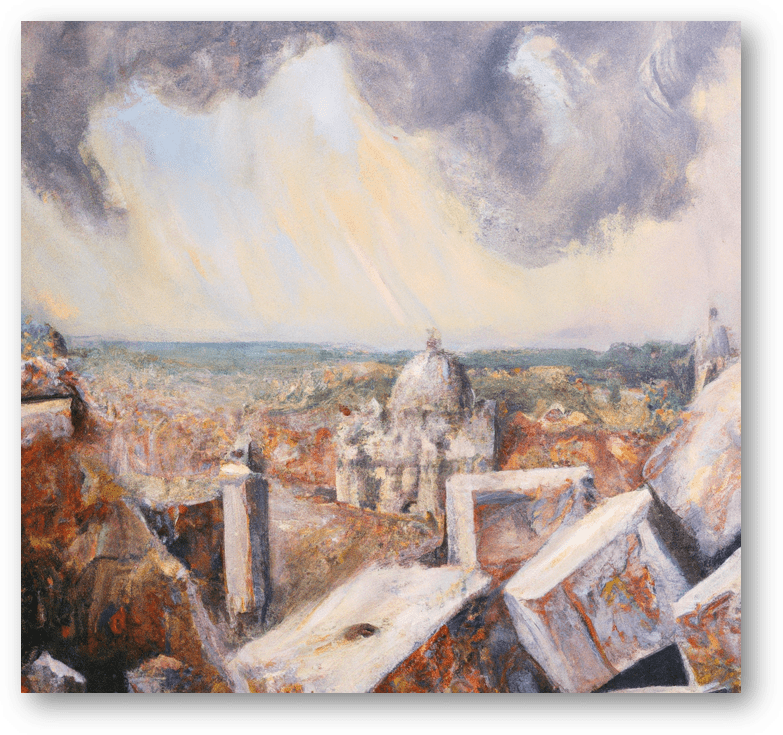 The Roman Empire was vast and powerful. Its fall was a slow digression that was caused by various challenges faced over many years. Political, social, economic, and military challenges led to the end of a vast powerful empire. Read on to explore the issues this great empire faced that led to its decline.

Rome was a vast empire spanning 3 continents at its height in 44 BCE. The mighty Roman army conquered more and more land.

However, the Romans treated the conquered people well, allowing them to retain their own governments and customs. The empire wanted 2 things from the people they controlled: taxes and soldiers for the Roman army.

Rome suffered from various periods of upheaval and unrest throughout the years. When the emperor Augustus came to power in 31 BCE he stabilized the government.

His rule began a period of 200 years that became known as Pax Romana or Roman peace. During this time Roman rule brought peace and prosperity.

Roads were built connecting places in Europe and soldiers helped to keep them safe.

The Romans controlled trade routes throughout the Mediterranean Sea. Before cars and airplanes this was the main “highway” for trade and commerce. This brought great wealth to the empire.

Constant war and overspending drained the government’s reserves. In order to raise money taxes had to be increased. This caused anger and protest among the Roman citizens.

The government also coined more money, which resulted in a decrease in its value and inflation (increase in prices).

The welfare system in the Roman Empire also played a role in its decline. The government started giving handouts to the poor and unemployed to avoid unrest over economic hardships.

This sounds like a good idea, but it created a culture of dependence. People became less willing to work, and the economy suffered as a result.

The empire suffered from a labor deficit at the same time. It had relied upon slave labor for farming and craftsmen. Traditionally, Rome would get these slaves from the lands they conquered. As the empire weakened and conquests waned so, too did the slave labor.

Government corruption was a big problem. Many of the officials in the senate and elsewhere were dishonest and incompetent. This caused citizens to stop trusting and supporting the government.

The empire had become increasingly complex and bureaucratic, and its government was no longer able to sustain it. The senate became bogged down with too many departments, and decisions took longer to make than ever before.

Emperor Diocletian divided the Empire into two halves in the hopes of making it easier to govern. Over time, however the 2 halves stopped working together and drifted apart. The Eastern half would become the Byzantine Empire and thrive even after the rest of Rome fell.

In the 200 years before Rome officially “fell” the population of Rome had declined because of disease and war. The many urban areas had terrible health conditions. The average Roman citizen lived for about 25 years. Many women died in childbirth.

For hundreds of years the Roman government kept the poor people pacified (content) by offering them free food and entertainment.

A Roman poet coined this “Bread and Circus”. Tens of thousands lined up for free bread and other food. The government also paid for bloody Gladiator fights in the Roman Colosseum. Public executions were another source of entertainment.

This social welfare system worked for a long time. As more people became poor and fewer paid taxes this practice became too expensive to continue.

The Roman military played a significant role in the fall of the Roman Empire. The decline of the military began with a series of reforms that weakened the army’s ability to defend the empire. These reforms included:

– Reducing the size of the army

– Focusing on tactics that were less effective against barbarian invaders

– Decreasing pay and benefits for soldiers

– Resorted to using mercenaries (soldiers for hire) that were poorly trained and lacked discipline.

At the same time Barbarians from Germanic people invaded the empire over hundreds of years. They began on the outskirts of the empire and infiltrated further and further until they finally reached Rome.

In 476 CE the Germanic leader Odoacer sacked (invaded) the City of Rome removing the last emperor. Fires broke out and many citizens were taken as slaves. This date is generally accepted as the official Fall of the Roman Empire.

The Slow Death of an Empire

Rome did not fall in a day. It took hundreds of years and many challenges to take down a vast and powerful empire. Some causes were internal, corruption and bureaucracy sopped the progress of its expansion. External threats from any barbarian assaults compounded the problems.

The Impact of Ancient Rome

It is irrefutable, however, that this vast and great empire influenced history. Benito Mussolini would try to recreate the greatness of the Roman Empire. Western civilizations would be influenced by many of their ideas. And the future will decide if their ideas were the best way to create a utopian society.

CLICK HERE TO GET A COPY OF THIS ARTICLE

link to The Powerful Patricians of Ancient Rome

The term patrician is sometimes used today to describe a “high class” person. The word started a long time ago in Ancient Rome. Let’s take a look at the original patricians. Patricians and...