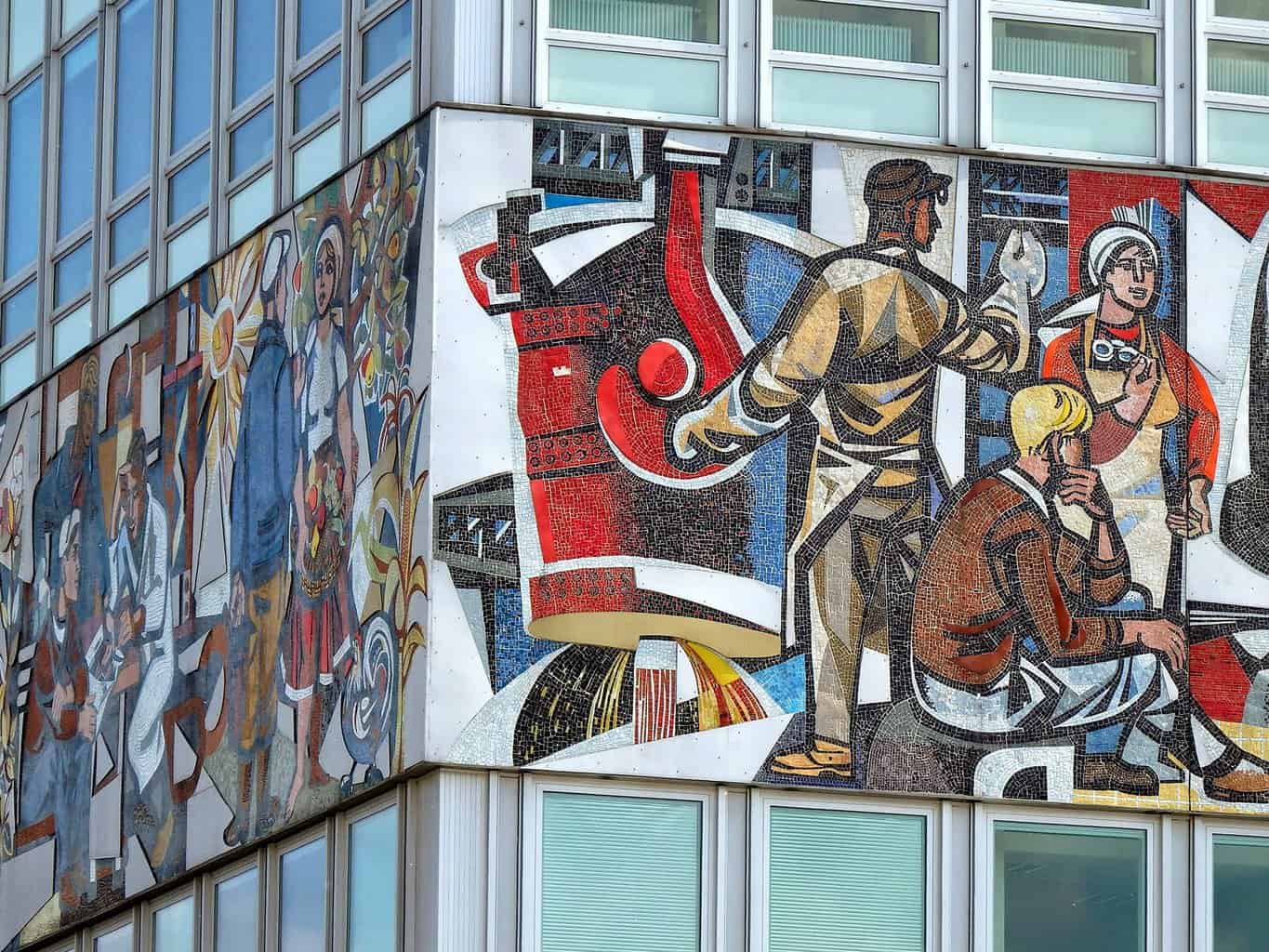 Socialism is the belief that society should work together to create a better society. It often involves talk of control of the “mean of production” and other such things. Socialism grew out of the industrial revolution, political enlightenment, the needs of workers, popular movements, and as an alternative to communism. Socialism continues until this day.

There is a new political memoir entitled Radical: My Year with a Socialist Senator by Sofia Warren.  Julia Salazar is a state senator representing parts of Brooklyn, New York.

And, like some left-leaning politicians these days, she proudly takes the “socialist” label.

But, what is “socialism”?  The word is one of those terms that is tossed around, both in positive and negative ways, while many people are sort of confused about what it really means.

Socialism is based on the idea that common or public ownership of resources and means of production leads to a more equal society.  Look at the word itself.

The idea is that society itself (society/social, get it?) should regulate the basic things, not leave them in private hands.  And, society should also provide basic protections for everyone, including health care.

This chart provides a helpful summary that compares four basic economic systems, showing socialism’s place among the others.  Sen. Salazar talks about her own beliefs here.

Socialism is not the same as communism.  Socialism tends to be a more gradual, limited, approach while communism is more revolutionary and absolute.

For instance, the government controlling “public utilities” like gas, electricity, and the public airwaves is a form of socialism.

This is so even if the government does not control everything; private control still is part of the mix.

Communism is more absolute public control of all things.  The official stance during the Cold War in Eastern Europe held that even there “communism” was not yet present.

The History of Socialism

Socialism was around in some form throughout history.  Many societies, including Native American ones, run things as a society-wide enterprise.

Early Christians supported a sort of socialism, holding everything in common for the good of the group.

When “socialism” is referenced in history books, it often fits in somewhere around 1850 until World War I, with the bad type of socialism then arising.

And, that is an important “socialist era.”  We should, however, remember that socialism did not solely exist in that period.  It continues until this very day.  The “causes of socialism” is not just a matter of history.  It is about today.

The path into the modern era was paved during the industrial revolution, which first started in England in the 1750s.  This was the road to the mass production of goods and services.

There also was a large growth of population.  The move from living on farms to mass industrial urban (cities) living caused a lot of hardship.  Great change is often messy.  The move from a small rural and agricultural society to large, often dirty and crowded cities, surely was.

As the economy grew, so did the government to take care of the growing economic system in place.  A bigger government left open the possibility of a more socialist state.

Everything seemed big and impersonal.  Big was more economically efficient, leading to a few owners having a lot more money and power.  This left the average worker, who seemed but a cog in a wider machine.  They did the hard work often with little to show for it.

The industrial revolution continued in some parts of the world into the 20th Century, including post-WWII development in the Third World.  The basic concerns and problems are still with us as we are getting into the heart of the 21st Century.

The causes of socialism are not merely things found in our history books.

One problem for the struggling workers (labor) was that there was often a glut of supply.  The end of the Middle Ages led to a mass exodus to cities for work.

Ireland suffered a major famine, leading to a mass migration to the United States.  The Irish competed with many other immigrants, who came in large numbers even though they often had to suffer harsh working and living conditions.  It still was an improvement for life at home.

Basic economic theory suggests that when labor supply outpaces demand, those who run the show have an incentive to offer as little as possible.  This leads to labor exploitation and unrest.

Meanwhile, the increase of workers (and their families) provides growing populations that society has to take care of in some fashion.  Again, this continues in some fashion to this day.

The traditional approach was mercantilism, which involved a country closely regulating the economy, concerned with its own profits. The 18th Century economic theorist Adam Smith promoted a new approach: less government power over the economy and support of free trade.

Adam Smith was part of a wider Age of Reason, which was an intellectual movement of European history in the 17th and 18th Centuries emphasizing reason and human development.

This period of enlightenment led to major changes in political and economic thought. Also known as “ideology.”  Ideology includes all those “isms” like capitalism, communism, and socialism.

Ideas helped to inspire popular movements, including political revolutions in Europe and the Americas.  A basic theme of political enlightenment was that society had a basic duty to serve the needs of the people overall.  Various groups and movements arose to address such needs.

The United States developed the idea that democracy, rule by the people, would be the best way to do this.  Reform movements developed to help address various problems and needs of society such as slavery, education, and women’s rights.

Popular movements recognize various problems, and many of the people involved are personally affected by them in various ways.  The problems are not merely accepted as “how things are” or the responsibility of a select view (elites, nobles, the Church).

No, the problems are the responsibility of the people as a whole, and the people as the whole in some basic way have the duty and ability to address them.

And, a basic way to address society-wide problems is by governmental regulations of some type.  The Chartism movement in England in the early 19th Century was one such popular based push for political reform.  Chartism is an example of a socialism-based movement.

To sum up what we learned so far: a movement for reform involves a need, ideology, and a sizable popular movement open to change. The industrial revolution and related great changes provided a need. The Enlightenment provided the ideology and helped to inspire popular movements for change. And, also important, the people involved believed that change was possible. They did not accept the situation as unchangeable or “fated to be.”

Karl Marx saw the world as one divided by class — the bourgeoisie (owners of means of production) and proletariat (workers).  He co-wrote the Communist Manifesto (1848), calling for the workers to unite.  Communism predicted a societal utopia would soon be possible.

Karl Marx spoke of a “specter” haunting Europe and communism over the years has been seen as scary.  The “Red Scare” of the 1950s is a leading example.  Communism, however, was more of an ideal than a reality.  The development of communism in China is a prime case study.

Socialism is communism translated into real world practice.  The needs of workers, inspired by political ideology that gave them the idea they had the right to demand change, led to the growth of a labor movement. Workers joined together to form unions to demand basic protections such as a minimum wage, maximum hours of work, and social welfare benefits.

There was also a growing demand for reforms to address the needs of a modern day heavily populated, urban world.  Government became bigger, with more of a responsibility to regulate the economy and provide for the social needs of the people.

A form of socialism became a basic norm.  The New Deal in the United States is a prime example of a country taking a middle path, the danger and hopelessness of millions during the Great Depression.  The United States has a basic social safety net, if not as big as many might wish, and a large degree of government regulation of the economy.

Socialism is so normalized that even people generally conservative in sentiment well accept something called “Social Security” and government regulated medical programs such as Medicare.  A basic cause of socialism, in the end, is its success.  Popularity keeps it in place.

A major goal of what might be called socialism-lite is promoting certain basic protections that are enjoyed by everyone.  Socialism argues that this is necessary for basic equality.

The concerns that helped to increase the popularity of socialism continue, including with modern struggles over globalization, racism, and other problems.

Meanwhile, as socialism is in place already, there is a push to expand its reach.  Socialism has expanded in various ways worldwide, providing models for supporters in the United States.

The failures of communism have tempered the support of socialism somewhat.

Some who have studied Eastern European history such as Kristen Ghodsee argue (while not ignoring the bad things too) socialism greatly improved the lives of those who lived under its banner.

I remember one of my relatives several years back being shocked when someone praised Cuba under Castro.  Communist Cuba for many is simply a horrible place.

Nonetheless, socialist reform did improve the life of the country in various ways. And, to the degree Cuba has suffered fascist rule, communism alone did not lead to that result in Latin America.  With humility, perhaps that is a lesson for us all.

Socialism remains a popular movement, even if you do not think it is the “only way forward.”

My own representative to the U.S. Congress, Alexandria Ocasio-Cortez (nicknamed AOC), self-represents as a “democratic socialist.”  That means she promotes socialism by democratic means.  Some see that as a bad thing.  Some think it is not bad at all.  Some do not really have much of an opinion.

Either way, she is a part of a wider movement that grew out of a range of things.  These things are connected to each other.  And, will continue for quite some time.

No matter your position on socialism, keep in mind the whole story.  As you continue you live it.

link to Urban vs. Rural Life in the Roaring Twenties

The year was 1920, and for the first time in United States history more people lived in cities than the country. Urban and rural life had many differences. The cities were more diverse with a growing...

Continue Reading
link to A Brief Summary of the Punic Wars