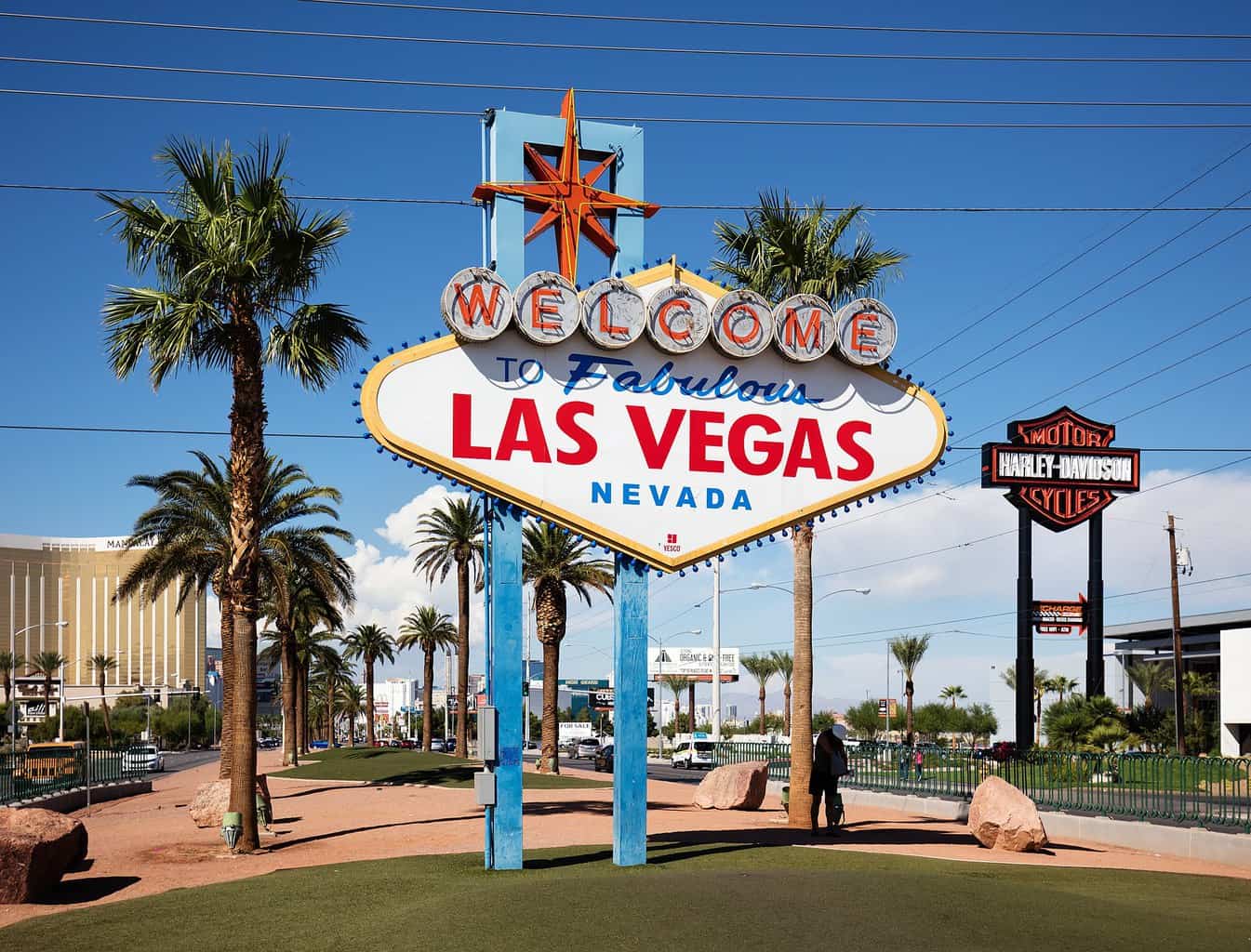 “What happens in Vegas, stays in Vegas.”  The readers of this article might be a bit too young for this saying.  But, it might make you think — why exactly was Vegas built in the middle of nowhere?  Is it not in the middle of a desert?  Turns out that Las Vegas is not only an “oasis” from everyday life today.  Las Vegas itself was established on top of a desert oasis.

Las Vegas, Nevada is a city that’s situated in the middle of a desert. Yet the city itself was built on an oasis. As we look at its history, for hundreds of years the remoteness of Vegas was its appeal for various groups that settled in the area. If you need a place to “hide” what’s better than an oasis in the middle of the desert? Modern day Nevada is the driest state.  The average yearly rainfall is less than ten inches, less than a third of the national average.  The Las Vegas Valley, however, is an exception.

The Las Vegas Valley in prehistoric times was a marshy area that was great for a lot of plant life.  The waters eventually dried up and we had the hard life of the Mojave Desert.  But, eventually water returned, forming a desert oasis.  This would eventually be Las Vegas.

Over 10,000 years ago Native Americans settled in the area.  They lived in small villages and built dome-shaped homes called wikiups.  No casinos were discovered from archaeological remains though the Native Americans did entertain themselves in various ways.  This involved dancing and other “shows,” but of a more low key variety than you can find there these days.

The Spanish populated the American Southwest in the 1500s, but the general area around modern day Las Vegas was non-appealing desert.

A Spanish friar (think Friar Tuck of Robin Hood) was the first to arrive in the area.  A scout named Rafael Rivera, a member of a trading party, gave Las Vegas its name in 1829.  “Las Vegas” roughly translates as “The Meadows,” in honor of wild grasses that grew thanks to a rich supply of groundwater in the area.  Fur traders also travelled and mapped the area. John C. Frémont led an exploration team, appointed by President Tyler, in the 1840s.  War was possible and the United States wanted to get the lay of the land.

Frémont wrote about his exploits, including making camp at Las Vegas Springs.  A fort was built there, which was helpful later on when a war was fought with Mexico.  The U.S. won and gained control of the area.  Nevada would later become a state in 1864, in the middle of the Civil War.

The first group of Americans who tried to create a permanent settlement in the area were members of the Church of Latter Day Saints, also known as the Mormons.

Their beliefs, including support of polygamy in the early days, led to much opposition that sometimes resulting in violence.  Mormons decided to isolate themselves, including in places like Utah and Nevada, where other Americans did not find ideal places to live.

A small Mormon community tried to make a go of it around Las Vegas in the 1850s.  The leader of the Mormons, Brigham Young, instructed them to “build a fort there to protect immigrants and the United States mail from Indians.”  U.S. mail service already passing through the area.

But, the climate was still not good for a permanent community of that size.  Plus, there were disagreements among the community that caused problems as well.  The attempt failed.

Stuff Happens Out Of An Old Western

The Las Vegas area was basically unoccupied during the next few years except for traders and travelers with the occasional mining town tossed in.  Mining was an important industry in the Southwest, not just in the most famous boom period, the “Gold Rush” in California.

A prospector named Octavius Gass took over the old Mormon fort at Las Vegas. “Octavius Gass” is a name out of a Western, and his life had enough adventures to fill one.  Gass eventually lost the ranch he built in the area to Archibald Stewart, when Stewart called in a loan payment.  Stewart was killed in a gunfight a few years later.

The land passed on to Archie’s wife, Helen.  Helen Stewart did well for herself, becoming the biggest landowner in Lincoln County, Nevada.  She became the first postmaster of Las Vegas.

Helen Stewart later became the first woman elected to the Clark County School Board of Trustees.  She also donated land for the Las Vegas Grammar School, which became a Native American school.  She died in 1926, by then known as the “First Lady of Las Vegas.”

Railroads were a major player in the real estate market in the late 19th Century. Helen Stewart bought up property largely in expectation of making a good profit by selling it to the railroads. Las Vegas was a prime location, being in between two railroad depots.

In 1902 Stewart sold the area around the old ranch to the railroads.  Railroad development started a new era.  The city of Las Vegas was officially established in 1905.

Hotels and other accommodations for travelers were built, including “red light” districts (polite  term for prostitution).  In 1910, at least on paper, gambling was outlawed in the area.

In the 1920s, the sale of alcohol was prohibited — it being Prohibition and all.  But, there was not much respect for such laws.  According to Robert McCracken’s book, “Las Vegas: The Great American Playground, “the city resisted compliance with the national laws to the best of its abilities.”  As we will see, this helped it also become a prime location for organized crime.

Nevada as a whole was a thinly populated state without many natural means of income, such as farming or such.  Entertainment and sin became an industry state-wide.  For instance, it became known as the go-to state to get a “quickie divorce.”  Divorces were much harder to obtain in those days.  But Nevada made it easy to come in for a short period and get one.

Ranches were set up to have somewhere to fulfill the necessary residency requirement.  The state eventually made marriages easy to obtain as well.

President Herbert Hoover is best remembered as leading the country into the Great Depression.  His name was often used in a negative way, including for naming shantytowns (slums) set up during his term.

However, Hoover did sign into law the funding for what became Boulder Dam, later officially renamed the Hoover Dam.  And, these days, more people probably know his name from that. (He did not invent the vacuum — that was William Hoover.)

Construction began in 1931, fifty miles from Las Vegas.  Las Vegas thrived, more money spent there in the 1930s than was spent on the dam project itself.

Illegal or not, gambling still took place in Las Vegas. Gambling was legalized by Nevada in 1931.  There was an opportunity for profit because nearby California in the 1930s cracked down on gambling.  Gambling, like water, tends to find an outlet. Helping things out, Prohibition was repealed in the early 1930s.  Alcohol was legal again.

Development of Las Vegas as a gambling and general entertainment center had begun.  Gambling and tourism is currently a billion dollar industry in Nevada.

Things slowed down some in the early 1940s as World War II was fought.  Nellis Air Force Base was built in the area.  Nevada also provided a good isolated spot for nuclear testing.  During the 1950s, many mushroom clouds could be seen.  In Las Vegas, it was one more tourist attraction.

“Organized crime” is the use of modern business models to run industries against the law.  And, as you have seen, there was plenty of opportunities in Nevada with much illegal Sin City activity involving things like alcohol, gambling, and prostitution.

Gambling and other entertainment-related businesses that were legal also provided a means for criminals to “launder” their money into legitimate businesses.  Some well placed bribes and other types of financial corruption could help the government to “look the other way.”

Benjamin “Bugsy” Siegel is but the most famous example of a member of “the Mob” getting into the act.  Siegel was later played by Warren Beatty and others in the movies.  So, both “legit” and “illicit” money was involved in gambling.

Local and federal attempts to fight organized crime continued since gambling began in the area.  Over time more federal laws (including against “racketeering” — the RICO Act) were available. Also, old timers aged out.  The traditional mob figures were much less powerful locally in Las Vegas by the 1980s.  Like past Nevada history, all of this also can be found in the movies.

And, the government will continue to try to fight it. The Oasis is the name of at least one Las Vegas resort.

The area continues the role played since prehistoric times.  It might be in the middle of a desert, but the area is an oasis, a pleasure spot for all who wish to take part. It’s even more enjoyable with modern-day air conditioning.

The “oasis” is more man-made now, the natural springs in the area stopped back in 1962.  Obtaining water to refresh the area takes a lot of work.

And, remember, what happens in Vegas, stays in Vegas.  At least, if you are old enough.