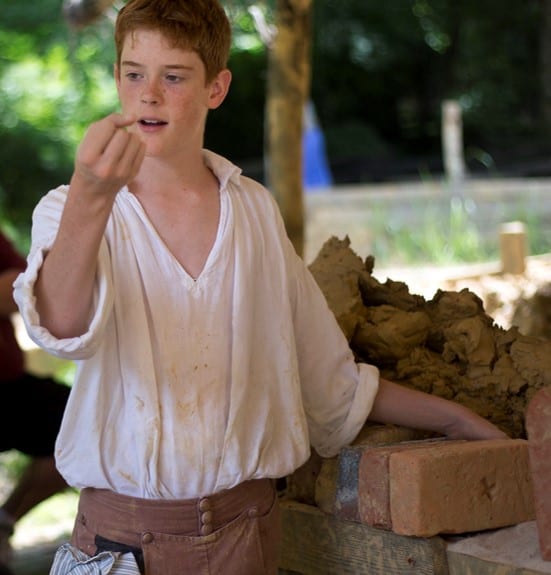 British colonial times ran from 1607 until the War of Independence (1775-83).  Like today, childhood was an extended period of preparation for adulthood.  School ended much sooner and marriage might occur in the mid-teens.  Nonetheless, teen life did exist as a middle period between young childhood and adulthood. Colonial teen life had various familiar aspects while being different from modern teenage life in a variety of ways.

Did “Teenagers” Exist in Colonial Times?

The first permanent British colony in America was in Jamestown, Virginia all the way back in 1607. Life in each section of the original thirteen colonies (North, Middle, Southern) was different in a variety of ways.

And, things changed as well depending on your status, such as being free or enslaved, or life on a farm or in the city.  Life had a lot of diversity, like today.

How about life as a teenager?  The basic understanding that the teenage years should be an extended middle path between young childhood and adulthood is a concept that developed over time.

When were teens invented?

Some social historians will tell you that the full “invention” of the teenager concept was not completed until the 20th Century.   Teens before then often lived as full adults.

Children, all the same, were not merely “little adults” even if they had to deal with more adult things than children today.  And, teens continued to be treated differently from adults, even if adulthood often came sooner than it would come today.

So, yes, teen life did exist in colonial times.

A basic way to show that “teen life” existed is to look at the laws of the time regarding parental control.  A thirteen-year-old was not simply treated like an adult.

Parents, in particular the male head of the household, were socially and legally in charge.

The law soon started to draw lines regarding older teens. Massachusetts in 1646 passed a “Stubborn Child Law,” which technically allowed the law to step in when an unruly son over sixteen years of age did not listen to his parents (mom or dad), and apply the death penalty.

A bit extreme and unlikely to have been applied literally too often.

The law, which other colonies soon adopted in some form, does show that there was a period between early childhood and adulthood in which a person was still not treated as a full-fledged adult.

Legal adulthood began to be understood to occur between about sixteen and twenty-one, often younger if you were a girl.  Marriage would be a way to speed things along. Before then, you were still the responsibility of your parents or guardians.

Education was a mixed bag in Colonial America.  Public schools first began to be popular in New England, particularly to teach people how to read and understand the Bible.

Hornbooks were a popular tool to teach students the basics.  Many children were taught at home, how to do basic tasks such as caring for animals, sewing clothes, and so on.

If schools existed, chances were that colonial children would have stopped going by the time they were a teenager.

If their family had money or they showed a special ability, a teenager might obtain additional tutoring. Or, sent to one of the few colleges available, including Harvard.

How much did teens work in colonial times?

The average teenager, however, was not in school.  The existence of middle and high schools was a long way off.  The average teen would be helping to take care of a farm.

There were lots to do, and the average farm required to be mostly self-sufficient.

For instance, the reason why Election Day became the first Tuesday in November was that it often was a long trip to the polling place, and you might not be able to get there on Monday, with Sunday being a day of rest.

The nearest town might be a long distance away.

Colonial Life on the Farm for Teens

Some teens were indentured servants, obligated to serve a period of years before being free.  Slavery also existed in each colony, particularly in the South.

Native Americans were at times slaves, but mostly British colonies had black slavery.

Teens often became apprentices to learn a trade.  Benjamin Franklin became an apprentice to his brother at age twelve in order to learn how to become a printer.

Apprentices often had to serve indenture contracts for a period of years and could be forced to return if they ran away.

Life could be tough, including physical mistreatment. Franklin himself ran away to Philadelphia at age seventeen.

The teen years were more often spent in some sort of training role in the preparation for adulthood than at a desk in school.

What Did Colonial Teens Wear?

Clothing in Colonial America was usually homemade from cotton, linen, and wool.

There were no regular trips to the mall or catalog shopping.  Only the rich were likely to be able to buy their clothes ready-made.  And, even the well-off might have their clothes made at home.

Clothing was meant to be practical with a nice outfit only used for special occasions such as Sunday church services.

Colonials wore loose undergarments (“shifts”) but did not have underwear like we do today.  A first bra was not a teen milestone back then.

Children started to wear adult outfits when they were as young as five or six.

Girls began to wear uncomfortable “stays” made of things like bones, wood, or metal when their bodies started to mature.

Stays were meant to improve posture and provide women with an attractive appearance.   Girls began to wear them at around thirteen or fourteen.

Girls grew their hair long but usually did not wear it loose. The hair would be pulled back and hidden under a cap.

Older boys and men back then often wore wigs and tied their hair up in the back.  Both men and women often powered their wigs.

Many boys and men also wore hats, the most popular the “tricorne” hat with three sides.

Teen girls often wore jewelry including pearl necklaces, silver hairpins, and gold earrings. More conservative families such as Puritans and Quakers did not allow such finery.

Rich girls also might use fans made from paper, silk, lace, bamboo, ivory, and wood.

Makeup was not commonly used in colonial times.  Makeup was in vogue in Europe at the time and Europeans that visited the colonies commented on the lack of makeup use there.

Makeup was more likely to be used by people with money. Makeup could be used to cover up blemishes, including smallpox scars.  Makeup could also be dangerous, made of things such as lead.

There were also simple hacks to improve appearances such as lips reddened by sucking lemons and the use of various things to improve one’s breath.

What Did Colonial Teens Do For Fun?

It might be hard for a person to believe that there was much to do before the invention of television, computers, and all other modern inventions that seem necessary parts of survival.

Teens did a range of things that they still do today.  Teens read, fished and hunted, swam, spent time with friends, and played a variety of games.

Games such as checkers, a form of bowling (nine pins), and many more existed.  Telling and acting out stories (consider the girls in Little Women or in Jane Austen’s time)  might be thought of as their version of television.

Teens often made chores into something of a game.  Girls might have quilting bees.

Teen boys might go on hunts with friends and family.  Debate was also a form of amusement for teens if they went to college.  Snow and ice also brought a lot of fun, including sledding and ice skating.

How Did Teens Date In Colonial Times?

Romeo and Juliet is an ideal story for high school. Romeo was around seventeen and Juliet was about thirteen.  It is like if a junior or senior went out with a freshman.  Teen love.

Teens in colonial times had various opportunities to have relationships with the opposite sex.  They could engage with boys and girls at nearby farms.

Church, trips to town, and special family occasions and celebrations provided a chance for different families to interact.

There were also various opportunities to find a way to be alone.  There were many premarital pregnancies.

Like today, the teenage years were the time when boys and girls had their first relationships with the opposite sex, not jumping immediately to adulthood just because puberty had arrived.

READ ABOUT MARRIAGE FROM COLONIAL TIMES TO THE PRESENT HERE.

Did Teens Marry In Colonial Times?

The minimum age during English colonial times to marry was twelve for girls and fourteen for boys.  This does not mean that people actually usually married that young.

Anyone who got married before the age of twenty-one needed the permission of their parents or guardian.   Slaves married as well, but in time, it often was not legally recognized.

Girls were more likely to marry at a younger age.  Girls had a range of household duties and could also help their husbands if they had a shop for something in town.

Women had limited means of living on their own so they either married or were taken care of by their families. Pregnancy often resulted in marriage.  Sex before marriage happened but was against the law.

When did teen boys marry?

Boys might marry a bit older, especially if they had extended apprentice or indentured contracts to serve out.  Marriage before the end of the teen years was quite possible there too.

Some marriages arose out of love.  Love was not at the time often deemed a necessary thing for marriage.  In fact is was rare.

Marriage was often more of a practical union.  Men and women had specific roles to play.  Children had to be raised.

Also, marriage often was a means to form alliances between families, including passing along property.

Children in Colonial America were not merely “small adults.”  Teenage life also existed back then as well.

It might have involved a lot more work than teens are used to these days.  Marriage and adulthood as a whole might have come sooner.  And, there was a lot less schooling.

There also were things familiar to teenagers today.  Teens were not quite adults.  They still were the responsibility of their parents. And, teens had some fun while preparing for adulthood.

Hi, fellow teachers! Unless your school pays for a test-generating software creating assessments is SO time-consuming! That's why I started creating some done-for-you tests and quizzes available...

IF YOU WANT A COPY OF THIS READING PASSAGE CLICK THE BUTTON BELOW THE READING. The 13 Colonies The very first British colony in America was Jamestown, Virginia back in 1607. After a tumultuous...