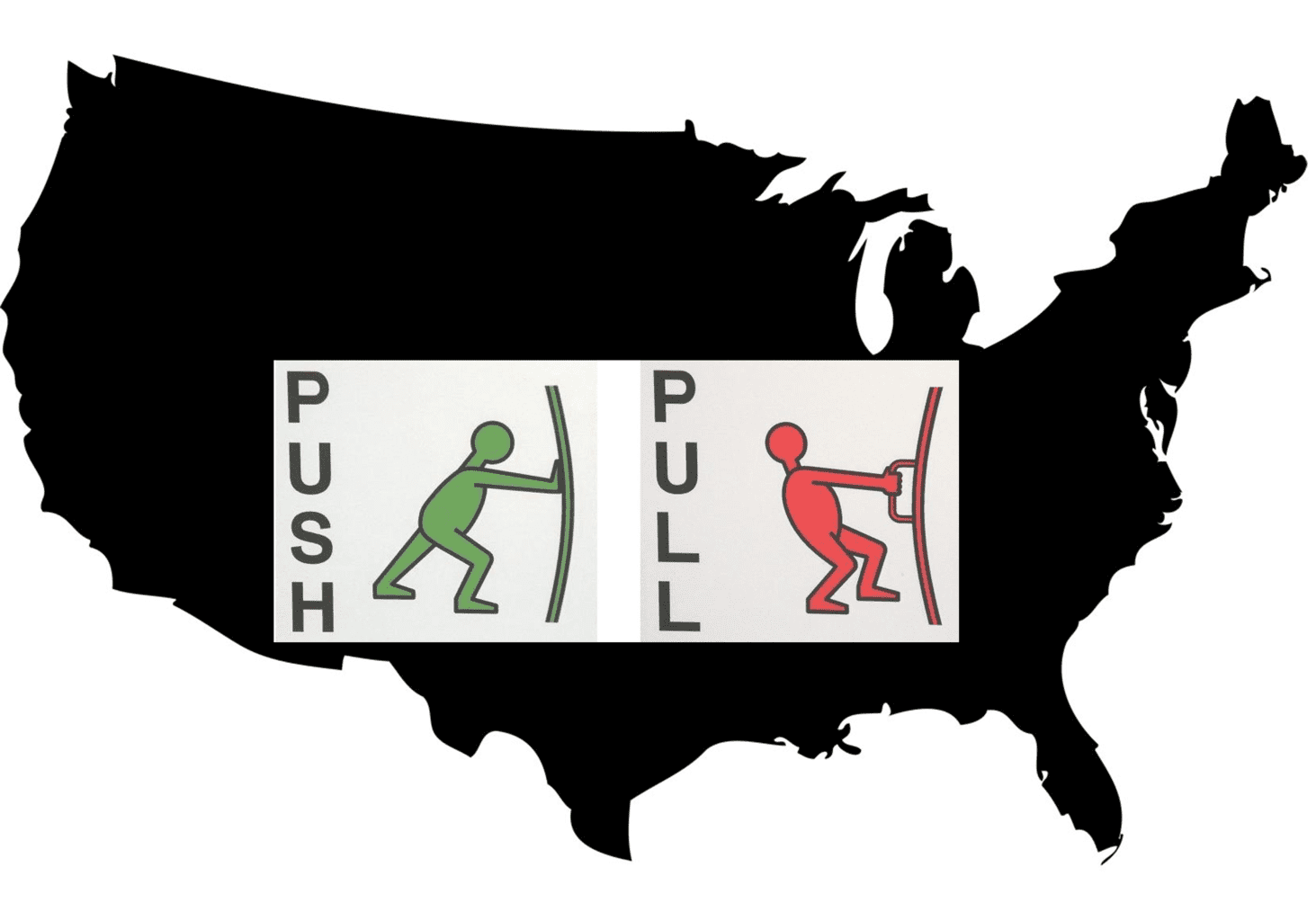 Migration is the movement of people from place to place. Immigration is international migration. People migrate for a variety of reasons, including domestic, economic, environmental, political, and social.  These reasons “push” people to move from where they live and “pull” them to move to new places. Learning about the push and pull factors help us understand history and better address the effects of migration.

Push Me, Pull Me

This includes why we live where we do and why we decide to move to other places.  We can divide the reasons why people move into two categories: push and pull factors.

Migration as a whole, and often on an individual basis, will usually be a mixture of push and pull factors. People settled in the American colonies both because they had certain appealing aspects (pull) and because people were moving away from problematic situations (push).

And, there is likely a mixture of push and pull factors involved.  It’s complicated.

Push Factors: I Have To Get Out of Here!

The push factors of migration can be grouped into five basic categories:

Domestic push factors involve problems arising from the population of a region. Crime is one major reason people might move.  A region also might be overcrowded.  Many moved to the American West because of “wide open spaces.”   Disease is often a factor as well.

A major reason people move is to improve their economic situation.  If a place has a substandard level of living with limited job opportunities and a horrible economy, it might be a good time to move.  Moving might be hard, but the current situation is worse.

People also might move because there are problems with the natural conditions (environment) of the place they are now living.  Farmland might no longer be productive.  The location might be polluted or be an uncomfortable temperature.

The Dust Bowl led to a migration westward.

Political situations also often lead to migration. This would include political persecution, domestic unrest (political anarchy leads to many problems), and warfare.

If the political situation does not provide stability and adequate services, it might be time to move.

Social factors often are more personal. A person might want to find a place to provide them with a good education or appeal to their religious beliefs.  Their current situation also might not be one that they personally feel is a good place to get married or raise a family.

Pull factors are basically the opposite of push factors. We can use the same basic grouping to summarize the various reasons why people are attracted to certain locations.

The domestic situation might be an improvement.  It can be safer, less crowded, more healthy, and just plain a nicer place to live.  The environment also can be better with more fertile land, cleaner air and water, and fewer threats of things like flooding or national disasters.

A major pull factor is an economic opportunity.  This can be a matter of degree.  If your country has a terrible economy, even a low-paying job (in the mind of many residents of your new home) might be a major improvement.  Cheap land often was given to attract immigrants, including in the American West during the 19th Century, both by the United States and Mexico.

A stable, well-run government also will often attract immigrants. The United States might still have various problems, but our political system offers many things.

A major draw here is political rights.  In the Middle Ages, Islamic countries often had the most open societies with well-run governments.  Government benefits like health care and education also attract people.

And, places might appeal for social reasons.  Israel provided a safe haven for Jews, including those whose religious beliefs made a Jewish homeland attractive.

A place might provide better schools for your family and overall culture right for you.  Hippies might prefer a commune while others might find urban living with its culture and pace of living right for them.

Thus, all of these reasons will depend on the people themselves.  Inuits migrated from Asia, for instance, but live in climates that some might find rather unappealing.

Push and pull factors of migration are an important part of the study of human geography and the formation of policymaking.

The movement of people, both to different parts of the same country and internationally, is an important part of understanding why things happen the way they did.

For instance, the Great Migration of African-Americans in the early 20th Century was an important factor in United States history in various ways.  And, people migrate today as well.  Good to know why.

Global migration is a major 21st Century concern.  But, the movement of people has occurred for all of human history to some extent. And, we always had to address the results in many ways. We can do a much better job if we understand what is driving people to migrate.

Also, if people are migrating away from a location, it is a big red flag that the situation there is problematic.

The understanding of push and pull factors will also influence policy in various ways, especially depending on the goals of the policymakers. Does a country or region (such as a city) want to attract migration?  Do they want to attract or not attract certain types of migration?

A better understanding is also good on an individual level.  Knowledge will help you and me as much as it benefits governments and other public institutions.  We are affected by migration in many ways (including moving ourselves!).  Being more informed will help us, too.

link to The Dust Bowl, an Overview (Download Included)