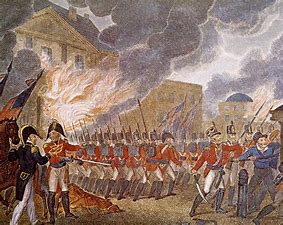 The defeat of the British at Yorktown (1781) led to peace and true independence for the United States. But, problems lingered, and it would take one more war to truly settle things with Great Britain.  This war is easily remembered by the year it began.

There were various causes of the War of 1812, many arising from England and France fighting each other during the Napoleonic Wars. The United States declared themselves neutral, and declared an embargo (blockade), but this did not stop both sides from interfering with American trade to each side’s enemies.  England, however, was the dominant naval power and was the most problematic to the Americans.

England also “impressed” (seized) thousands of sailors from American ships, arguing that they were still English subjects and subject to a form of draft into the British Navy.   In both cases, the United States saw this as a basic violation of international law as well a basic threat to American sovereignty (power).  A particularly controversial instance was the Chesapeake Affair (1807), involving the seizure of an American warship.

The English also supported Native Americans in the old Northwest Territory to provide a buffer zone with Canada. This inhibited American expansion and also helped the Native leader Tecumseh’s attempt to form a tribal confederacy.  There were American “war hawks” (such as Henry Clay and John Calhoun) that supported war for all these reasons, American national pride and expansionist reasons. Some thought war with England could even allow the United States to control Canada.

England was primarily concerned with its war with France and in fact ended the trade restrictions that was a major issue. A war with America would be a side show.  President James Madison was also wary about war. The minority Federalist Party, with strong support in New England and harmed by interference with shipping, also opposed war. Some members later met in 1814 in the “Hartford Convention” to voice their opposition.  Congress as a whole declared war with Great Britain in June 1812, news of the change of British trade policy only coming weeks later.

The British at the start of the War of 1812 were mainly concerned with the Napoleonic War and their troops and warships were mostly being used handling that conflict.  Nonetheless, the Americans had their own difficulties. Their own navy was small and not much of a match to even the limited British ships available.  The Americans did win some one on one naval battles.  Also, the ability to survive a naval bombardment was the inspiration of “The Star-Spangled Banner,” later the country’s national anthem.

The Americans were not prepared for war, including lacking quality army leadership and needing to rely on untrustworthy militia forces because of the lack of adequate professional troops.  Bad leadership caused major defeats in the Northwest Territory early on.  An attempt to invade Canada failed and resulted in the attack on Washington D.C. (including burning of the White House) in retaliation.  And, after Napoleon’s’ defeat, the British were able to focus more efforts on the American theater of war.

There was some success in battles with Native Americans, who in the end were the real losers of the war.  Their interests largely ignored as peace was negotiated (Treaty of Ghent) in late 1814, England and the US both determining extending the war was not sensible.  After peace was signed, but before it reached America, General Andrew Jackson had a big victory over the British in the Battle of New Orleans. This helped “seal the deal,” advanced Jackson’s political career and was a big patriotic boost.

The War of 1812 was in various ways a bit of a mess, but peace in a way served as the true end of the Revolutionary War. It also ended one final chance for Native Americans in the eastern portion of the United States to retain their independence. Spanish Florida soon became part of the United States, completing the process.