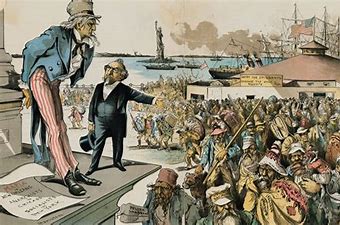 The American author Mark Twain wrote a novel in 1873 entitled The Gilded Age.  The book concerned the greed and corruption of post-Civil War life, which were disguised with a thin coating (gilding) of good times.  The era had a great expansion of industry and growth overall, but also a lot of problems not far underneath.

The second half of the nineteenth century was the time of the second wave of the industrial revolution in the United States.  Industry expanded production and new markets developed, particularly with the growth of railroads, improvements in refrigeration and new business models.  This all also brought a need for new workers, providing an influx of immigrants, including from previously underrepresented areas such as Eastern Europe as well as China and Japan.

The Civil War expanded the demand for a range of goods though the nation’s focus was for a time on winning the war and dealing with the peace.  Then, there was a push to “move on” from the Civil War, even if this meant the civil rights of blacks were largely ignored. This also opened up opportunities of corruption, profits bringing with it a temptation to cut corners regarding the rules. Various scandals, for example, caused difficulties for President Grant in the early 1870s.

There was a belief that if the government and society left industry alone it would naturally lead to prosperity (“laissez faire”).  Social Darwinism, a twist on the evolutionary theories of Charles Darwin, also argued that the fittest would survive.  This promoted an anything goes system of business ethics, at least, a concern that too much regulation would be counterproductive.  There might be “robber barons,” who use corrupt means to get rich, but it would still be good in the end.

The growth of industry led to new means to organize business overall. Trusts,  a large organization of business interests with significant market power, formed.  This helped allow a few people to obtain great wealth, including Andrew Carnegie (steel) and John Rockefeller (oil).  In time, there was a push for regulation, including the Sherman Antitrust Act (1887), which limited monopolies (when a company and its product dominate an industry, such as Standard Oil).

Industrialization resulted in horrible working conditions, often including women and children.  There were much fewer safety and environmental regulations.  Workers also did not have an eight hour day, often working six days, twelve hours a day.  Workplaces with dangerous conditions and long hours were named “sweatshops.”  Workers began to join together in labor unions to fight for safer conditions, better hours, and increased wages.  An early union was the Knights of Labor.

Political movements such as “populists” also began to defend the needs of workers as well as farmers.  The influx of immigrants and growth of cities overall had expanded party organizations, including Tammany Hall (New York City). Local political organizations provided an important means to provide for the needs of urban dwellers.  Expanding population in cities also led to the growth of tenements, buildings with many residences, often crowded and low quality.

A nation once mainly one of farmers with few cities was now a great industrial nation and more and more urban.  But, growth brought growing pains, and as the 20th Century approached, it would bring with it various means to address them.