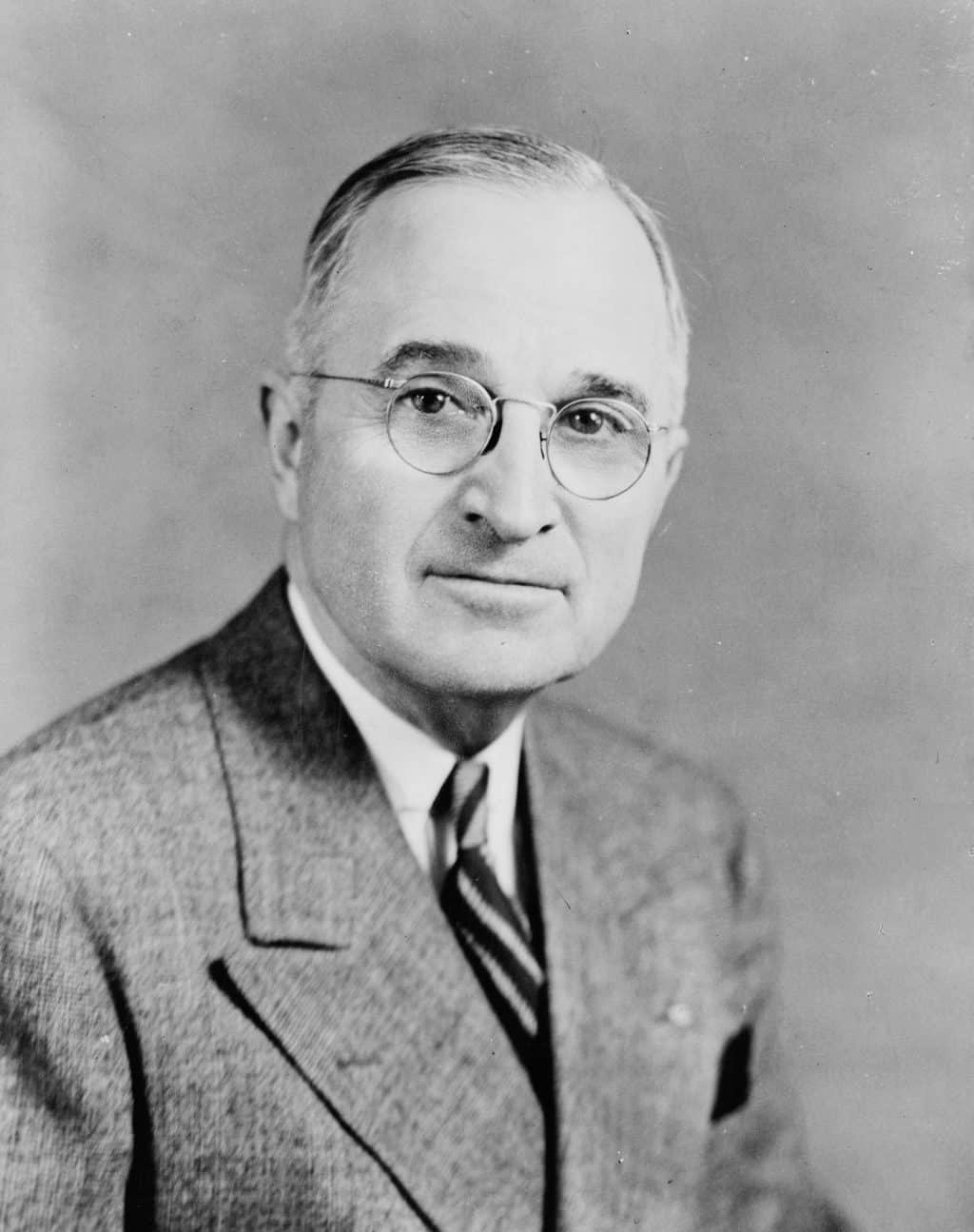 Below is a summary of the Truman Administration. It is available to download as a PDF copy for yourself. If you need a digital copy there is a Google link provided as well.

Harry Truman never finished college, but rose in the ranks in political office from judge to senator to vice president of the United States. When President Roosevelt died in office, it was left to Truman to deal with the end of World War II and the aftermath. After re-election, Truman had even more big decisions to make.

Harry S. Truman was born to a Missouri farm family of modest means in 1888.  He was the last person to become president without completing college.  Truman worked a number of different jobs including railroad timekeeper, bookkeeper, and farmer.  Truman had problems with his eyesight, but served in World War I.

After the war, he married Elizabeth “Beth” Wallace.  They had a daughter (Margaret), who later was a professional singer, biographer, and writer of mystery novels.  Truman was elected judge, earning a reputation of efficiency and integrity that ultimately led to him to be elected U.S. senator (1934),

Truman, a Democrat, supported President Franklin D. Roosevelt and his New Deal.  During World War II, he led the “Truman Committee,” the Senate Special Committee to Investigate the National Defense Program, which worked to reduce waste and mismanagement in U.S. military spending.  This put Truman in the national spotlight and helped make him the compromise choice to replace a more controversial Vice President when FDR ran for re-election in 1944.

FDR was already in bad health in 1944 and only lived a short time after being re-elected.  Truman became president on April 12, 1945, suddenly the leader of the United States in the midst of World War II.

Truman’s first months in office were rather busy: the surrender of Germany, formation of the United Nations, a meeting with British and Soviet leaders to address post-war decisions (Potsdam Conference), and the final months of the war with Japan.  Truman made the final decision to drop two nuclear bombs on Japan. Truman decided the bombing necessary given an invasion of Japan would cause a great loss of life, but the horrible effects made it very controversial.

The Soviet Union was a wartime ally, but split off after the war, and became the United States’ leader competitor on the world-wide stage.  The Soviets controlled Eastern Europe and pushed a world-wide spread of communist ideas.

A Cold War between Soviet Union and the United States arose, a major conflict that never led to a “hot” shooting war between them.  The Truman Doctrine opposed the spread of communism, including by giving funds to Greece and Turkey.  The Marshall Plan provided funds to help Western Europe rebuild.  He oversaw the  Berlin Airlift to supply U.S. controlled areas of Berlin that the Soviet Union blockaded.  The formation of Israel provided a key U.S. ally in the Middle East.

Communism continued to be a major foreign policy concern, including communists gaining control of most of China.  Truman helped to form the North Atlantic Treaty Organization (NATO) between the U.S., Canada and Western Europe.  When communists seemed to be about to control all of Korea, Truman supported military action (Korean War) to stop its spread; South Korea remained non-communist. Communism also was a concern domestically, resulting in “Red Scare” at home, a fear that communist ideas were infecting U.S. institutions.

Racial civil rights also was growing in importance in the 1940s, especially as the United States was fighting the evils of fascism. Truman oversaw the desegregation (ending of separation of the races) of the military forces and opposed discrimination in federal jobs.  This was also the time when Major League Baseball desegregated with Jackie Robinson playing.

Truman won a close re-election in 1948. The Twenty-Second Amendment was passed to limit presidents to two terms, but its terms did allow him to run again in 1952.  Truman chose not to do so and started a long retirement, dying in 1972.