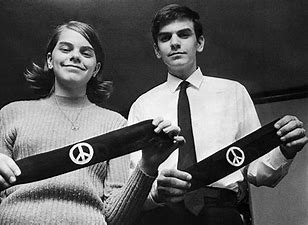 Students do not only study constitutional history, they are part of it.  Students, for instance, have free speech rights.  But, as any teacher will tell you, only so far.  A student protest during the Vietnam War led to a major Supreme Court decision.

Some students, Jehovah Witnesses, believed that being required to pledge allegiance to the flag violated biblical requirements. They argued that being required to do so by public schools (or being expelled) was a violation of their First Amendment rights, particularly the right to exercise their religion.  The Supreme Court in the middle of WWII agreed with them, but rested on freedom of speech.

The Supreme Court agreed that public school students could not be forced to communicate their support of another belief. The Court said that public schools can teach patriotism, but not this way.  One important aspect of the opinion was the recognition that freedom of expression is not merely about words.  It is also about certain actions, like saluting a flag, and symbols.  Symbols, such as a wedding ring symbolizing the love of a married couple, are important means of expression.

The 1960s is particularly remembered for people protesting a range of things they felt needed to change, including the need to bring an end to the Vietnam War.  Students, including those under eighteen, took part in these actions.

For instance, in 1965, quoting the Supreme Court opinion in the case arising from their actions, three students in Des Moines, Iowa decided “to publicize their objections to the hostilities in Vietnam and their support for a truce by wearing black armbands during the holiday season and by fasting.”  Mary Beth Tinker (13), her brother John (15) and Christopher Eckhardt (16) were the students involved.

But, their public schools opposed them wearing armbands to class, concerned that it would cause disruption.  The schools did allow students to wear political buttons and other symbols that caused some controversy.  The schools thus singled out a type of message, suggesting a bias against others. The students wore the armbands to school and were suspended for breaking the rules.

The students sued, arguing they had the freedom to promote their message, and that the school did not prove it was so disruptive as to warrant denying them the right to do so.  The Supreme Court agreed in a 1969 opinion, noting: “It can hardly be argued that either students or teachers shed their constitutional rights to freedom of speech or expression at the schoolhouse gate.”

The Supreme Court agreed that something, including symbolic speech, that could “substantially interfere with the requirements of appropriate discipline in the operation of the school” could be banned.  But, that wasn’t shown here.  Merely causing some disagreement, especially if the school allows some points of view over others (such as political buttons), is not enough.  That is just part of free speech.

Two justices disagreed, arguing that there was enough evidence that the armbands could cause problems that interfered with normal school activities.  Courts should not second guess the school’s judgment unless the schools were very unreasonable.

Over the years, schools and courts had to make various judgment calls, including involving such things as t-shirts with offensive messages or pro-marijuana banners at a school assembly.  Students have free speech rights, but there are limits. A student reading this is well aware of this, if not always happy about it.