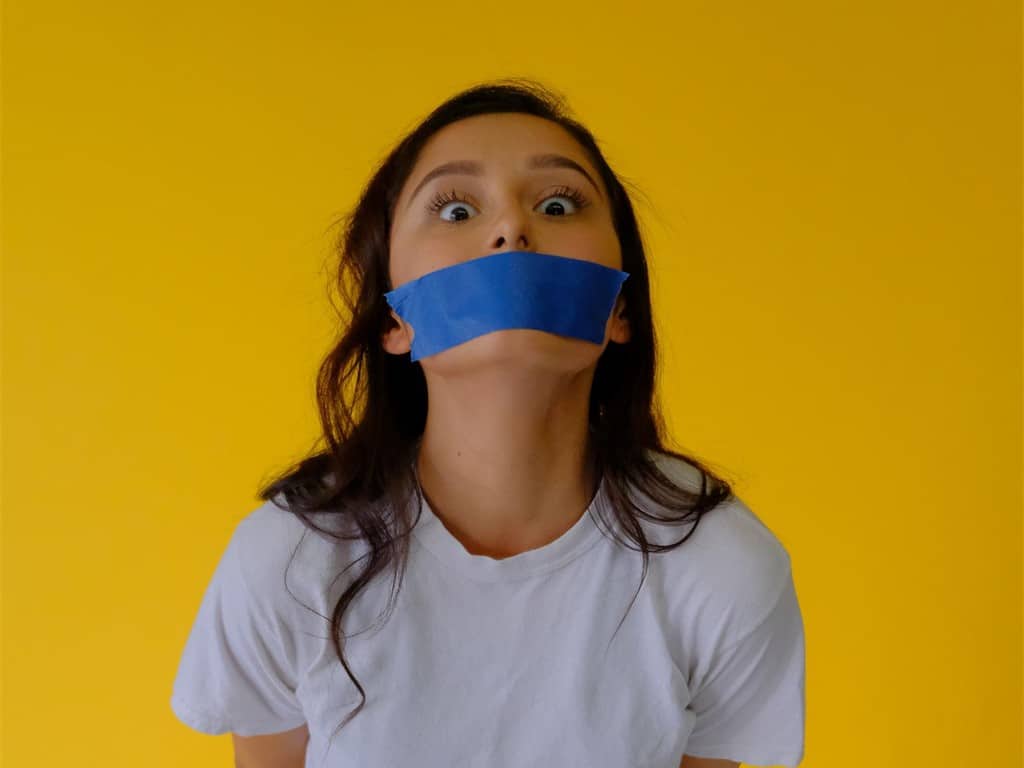 The ability to express oneself is very important.  Free speech is not only a basic part of a free society, it is important on a personal level.  If an authority or teacher interferes with your (reasonable) self-expression, you would be upset.

A public school teacher, among other things, is a government employee.  Disagreements with the government sometimes result in lawsuits.  Ultimately, the Supreme Court has had a lot to say about drawing lines regarding what public schools can and cannot do when regulating student speech.

Congress shall make no law respecting an establishment of religion, or prohibiting the free exercise thereof; or abridging the freedom of speech, or of the press; or the right of the people peaceably to assemble, and to petition the Government for a redress of grievances.

First Amendment of the U.S. Constitution

Free speech is so important that when the people demanded a list of rights to make sure the federal government did not abuse its power, free speech was right at the top of the list. It has been protected from the very beginning.

Religion is first, but religion also often involves speech, such as when people pray or promote their religious beliefs.

And, “no law” does not mean ALL speech is protected without limits.  “Freedom of speech” does not include things like threats or other things that are particularly harmful.  On the other hand, a lot of words have been written trying to draw lines to determine when and how speech can be regulated.

The Pledge back then didn’t have “under God” yet, so it was not a matter of using God’s name in vain.  No. They believed that saluting a flag was a sort of idolatry, bowing to an idol (the flag).  This violated their beliefs.

The first time around, the United States Supreme Court decided that public schools could require them to pledge allegiance to the flag.  It was seen as an acceptable  patriotic ceremony to unite everyone as one people.  Only one justice disagreed with the ruling.

The second time, in a case called West Virginia Board of Education v. Barnette, the Supreme Court changed its mind.  The Court, in a famous ruling, decided 6-3 that forcing people to salute the flag violated the U.S. Constitution.

Government run schools have to follow the Constitution.   Free speech includes freedom not to speak.  Promoting patriotism is fine.  But, forcing people to do this was not the correct manner to achieve this.  Today this is still the rule.

Three justices would have allowed the government to require the students to pledge allegiance even in the Barnetter case.  Major constitutional disputes often split the justices.  These questions are not totally obvious.  People disagree.

Armbands  as a Protest

The Pledge of Allegiance has words, but also involves putting your hand over your heart while saying them.  This “salute” is itself a form of speech.

For instance, in the military, you can salute an officer without words.  It is a form of symbolic speech, like a wedding ring is a symbol of one’s love.  It “says” something.  Symbols can be very powerful, even while being silent.

The next major case involved students wearing armbands to protest the Vietnam War.  You can read about the case in detail here, but simply put, it too is a “symbolic speech” case.  An armband is a way to protest, a form of speech.

The Supreme Court in that case, Tinker v. Des Moines, reminded us that constitutional rights do not stop at the schoolhouse gate.  Be aware, teachers also have rights.  It’s only fair.

But, the case also reminds us that rights have limits.  Speech that “substantially interfere with the requirements of appropriate discipline in the operation of the school” could be banned.  Speech that might be allowed elsewhere, like on the street, might be limited or banned at school.

A high school student gave a campaign speech at a school assembly. The quote gives you a flavor of his style.  For those that miss it, he used a lot of sexual metaphors.

It received a mixed reaction, but the school was not amused.  The student was suspended.  Was this “ appropriate discipline”?

The Supreme Court upheld his punishment 7-2.

Why? The school appropriately decided such a sexually suggestive speech was inappropriate.  Matthew Fraser, the student, might be able to say it outside of school.  But, the school can enforce a certain level of civility on school grounds.

Was Matthew “on notice” that the speech was against the rules?

It is important for the government to clearly say what is not allowed.  If not, students would be pressured — to avoid punishment — from saying something that is protected speech.  This is known as giving speech “breathing space.”

The Supreme Court decided that Matt was properly on notice that the speech crossed the line.  Two justices disagreed, but seven beats two.

The previous case was easier for the justices to decide because the student gave a speech at a school assembly.  Schools have the authority to regulate curriculum, such as the classes provided, books assigned, and school assemblies.

Hazelwood School District v. Kuhlmeier, for instance, decided that a school has the power to determine what could be in a school newspaper.  It is, after all, the school’s newspaper.  The New York Times’ editors control its content. The same applies to the school here.   An unofficial “underground” newspaper would be different.

Morse v. Frederick has somewhat silly facts, but there is the reason the justices were greatly divided on what to do with them.  There are important issues involved.

Joseph Frederick (a high school senior) and other students at a school event involving the Olympic Torch Relay held up a large banner saying: “BONG HiTS 4 JESUS.”  He later said the only reason they did so was to get on camera.

Again, the school was not amused. The principal told students involved to take the banner down.  Joe was the only one who didn’t do so.  He was suspended from school.  He sued.  The Supreme Court ruled against him.

Why did Frederick lose?

Why?  The Court said that a school can stop the promotion of illegal drug use during a school event.  The students were not, for instance, merely talking about drugs at lunch time or something.  This was more like a school assembly.

But, was the banner really promoting drug use? Or, was it mere nonsense? The Court decided it could be understood to promote drug use.  That can be stopped.

Two justices said, “okay, but a student can promote the change of the law,” like saying medicinal marijuana should be okay.  That isn’t promoting law breaking.

One justice would have given schools broad power to limit student speech. Justice Thomas argues that the First Amendment should be understood to allow that.

One justice said the case was very complicated and should be disposed of on technical grounds.  This would avoid making a mistake on sensitive speech matters.

Three disagreed with the majority totally.  They thought the ruling did not properly respect a student’s right to talk about matters of public concern.  Issues about drugs clearly applied.  And, the banner didn’t really disrupt school activities.

CLICK HERE TO CHECK OUT THE NO PREP LESSON!

The Case of the Cursing Cheerleader

Brandi Levy (“B.L.” in court documents, since she was a minor, but she has willingly let her full name be reported)  was upset.  She was in ninth grade and tried out to be a varsity cheerleader.  She wasn’t picked.  It seemed unfair to her.

Like many people have over the years, she expressed her frustration. The issue might not seem as important as the war in Vietnam or drugs.  But, free speech is not just about “important issues.”

And, cheerleading is rather important for a teenager.  So, she used Snapchat to vent to her Snapchat friends. The Snapchat message was a vulgar one using a popular  four letter word multiple times.

The message was deemed to be disrespectful to the cheerleading department.  She had signed an agreement to not post “negative information” about the squad.  Net result: she was suspended from cheerleading for a year.

The Supreme Court took her side with only Justice Thomas following his previous sentiment that schools should have wide discretion here.

A key issue here was that the speech in question was off school grounds.  The Court held that her Snapchat did not really interfere with actual school activity enough to allow the school to penalize her.  The specific facts, including her only messaging her Snaphcat friends, were carefully cited.

Schools have much less power over students when they are off campus  as compared to let us say parents.  Schools might in some cases — such as using a computer off campus to cheat on a test — be able to regulate off campus speech.

But, not here.  The Court was careful to note this was a new issue, and did not want to decide too much.  Later cases would help clarify things some more.

Free speech is very important.  Freedom of expression does not begin when one is eighteen.  It also does not end while one goes to school.  But, there are rules to follow.  And, the rules allow the government to regulate students in various ways.

A basic guideline is that the school can regulate speech if it will cause disruption.  This does not mean it can limit speech it doesn’t like.  It has to seriously interfere with school business.  This includes things like speaking out of turn in class, or violating basic rules of decorum.

Schools have the power to control school curriculum.  They can require you to read certain books and regulate school newspapers.  They can also stop promotion of illegal drug use.  But, they have much less power to regulate off campus speech.

The exact nature of the lines are unclear, and anyway, the courts at times change their minds on what they are.  Students like you can talk about all that and might already be taking part in litigation that helps further clarify the rules of the road.