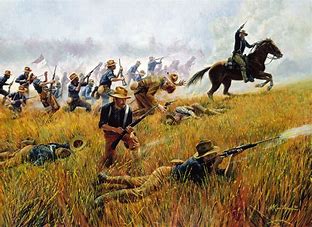 Imperialism is the extension of a nation’s power by means of diplomacy or military force. The Spanish-American War was a key moment in the growth of the world-wide imperialistic ambitions of the United States.

Cuba was a Spanish colony in the 19th Century. There was some support in antebellum (before the Civil War) United States to obtain the colony, but this was opposed as a pro-slavery campaign.  Meanwhile, the United States asserted a general interest in the affairs of the Americas under the Monroe Doctrine though accepting existing European control over their colonies.  United States business interests were also strongly tied to Cuba, particularly its sugar markets.

Starting in the 1860s, there was a strong Cuban independence movement, rising again in the 1890s under the leadership of Jose Marti. Spain resisted, leading to some harsh treatment of the rebels.  The rebels had American support, including readers of widely read critical newspaper articles by Joseph Pultizer and William Randolph Hearst using sensational headlines and content (“yellow” journalism).   But, the American President and many others opposed war.

President McKinley tried to negotiate a peaceful solution but also sent a warship, the USS Maine, to Cuba to ensure the safety of U.S. interests.  In February 1898, the Maine exploded in the Havana harbor, raising suspicions of Spanish involvement though there was conflicting evidence on the true cause.  Public pressure, encouraged in part by yellow journalism, increased and war was declared in April.

After the war, both colonies were granted to the United States as part of the peace treaty.  Filipino nationalists had hoped the U.S. control would lead to independence and fought a bloody guerilla war against the United States until  defeated in 1902.  The Philippines became independent in 1946.

The war against Spain in Cuba iwas a lot more messy, including leading to most of the American deaths, the product of disease much more than battle.  Nonetheless, naval victory over the Spanish again was key and led to peace negotiations.

The Battle of San Juan Hill is particularly known for the involvement of a volunteer cavalry made up of cowboys, ranchers, and outdoorsmen that was given the name “the Rough Riders.” It was led by Theodore Roosevelt, previously Assistant Secretary of Navy under McKinley and later chosen as his vice president (1900).

The two sides stopped fighting in August and peace was signed in December (Treaty of Paris).   Cuba gained its independence and Spain gave up control of the Philippine Islands, Guam and Puerto Rico to the U.S. for $20 million.

Cuba in 1903 leased the Guantanamo Bay Naval Base (“Gitmo”), still controlled by the United States today. The naval base and new overseas colonies overall were important for the United States’ growing imperialistic goals, also shown by annexing Hawaii (1898) and building a canal in Panama to provide an easy water route between the Atlantic and Pacific Oceans.