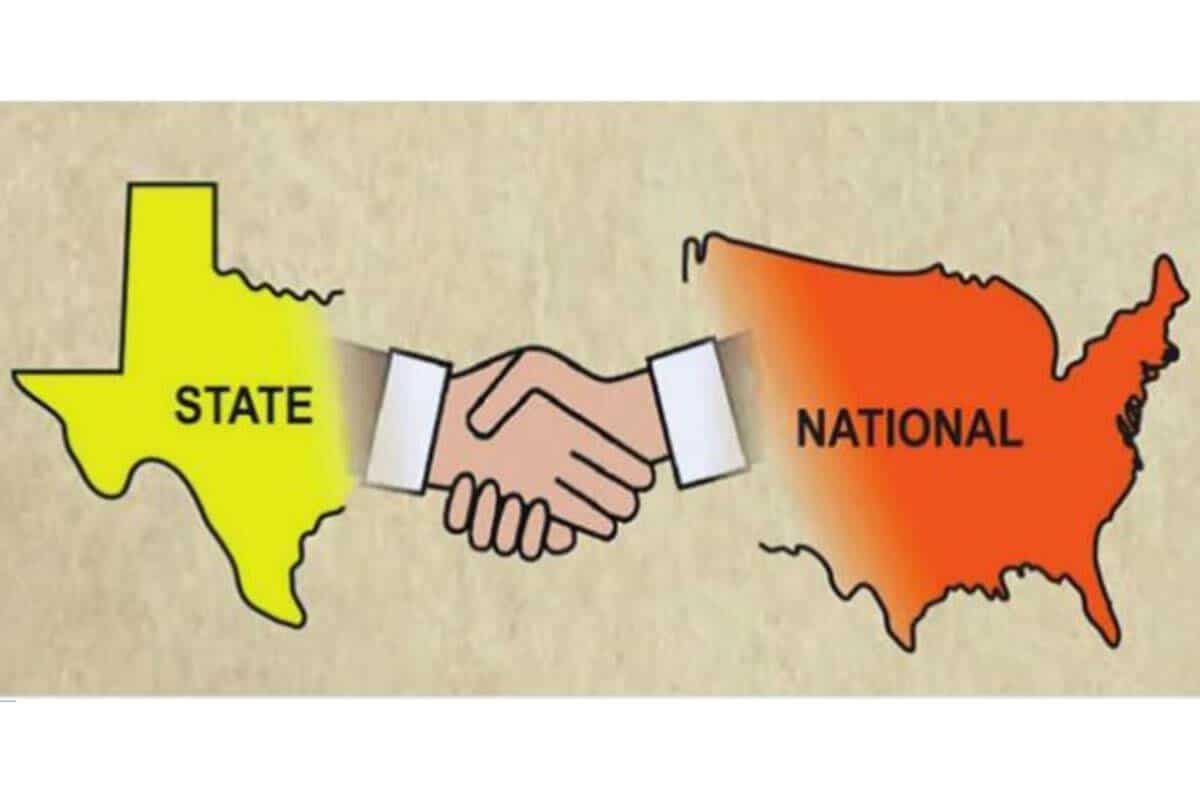 Federalism is a principle of government whereby power is divided between the central government and local governments. It is protected by the United States Constitution. The practice is also used by other governments. There are various ways to apply federalism.  Federalism has both positive and negative aspects. The exact details of applying federalism are very important in determining how it will work.

Federalism is a principle of government regarding the division of power between the central government and local governments.  It is a basic principle in the United States Constitution.

Federalism can be found around the world. For instance, both Canada and Mexico in various ways practice federalism.  There are also a variety of particular ways to put federalism in place.

The specifics here can matter a lot.  So, when thinking about federalism, do not assume that some other country, let us say Germany, does it in the exact same way as the United States.

Why? Because it’s very complicated with many pros and cons.  To better be able to make a judgment yourself, you need to examine both sides.  You are at the right place for that.

The needs, beliefs, and desires of one part of the country are different from another part.  Institutions that specifically address local needs are helpful.  A basic way this is shown in the United States is the jury system, with juries impanelled from the local population.

Federalism provides power to each region to focus on their specific needs, including a small area that might otherwise be ignored by the rest of the nation.  Meanwhile, there are certain basic things (such as foreign affairs and freedom of speech) set up for the nation as a whole.

A country that divides power between different governments promotes diversity.

Different states have different needs, and personalities (including who is elected and chosen to fill government positions), and make different choices. This leads to different ways of doing things.

Diversity leads to testing different things out, seeing what works, and putting aside what fails.  This is sometimes known as setting up the states as  “laboratories” to test things out.

Diversity also allows different types of people, with different views and characteristics, more of a chance to take part in governing. And, the national government gives a chance for representatives of local areas to come together (such as in Congress) to share their views.

A country the size of the United States (with about 330 million people) often seems just too huge for a single person to matter.  When the Constitution first was proposed, this was a major concern.  Local areas would be buried by a distant foreign government.

Modern communications help the national government be less isolated.  Nonetheless, the overall problem still applies.  One member of the House of Representatives can represent about seven hundred thousand people.  Two senators can represent millions of people.

Federalism makes the government much less distant from each person. Local government, closer with many more representatives available, allow each person to have more ability to directly take part in public life.  And, in the process, their needs are more likely to be addressed.

The government was first created to address the needs of the population.  When a place becomes too big for individuals to handle things on their own, society forms a government.

The government has a special responsibility to serve the needs of the people.  The government is given special powers to do this, including the power to make certain things crimes subject to imprisonment.  As Spiderman knows, with power comes responsibility, open to abuse.

Federalism divides power.  The United States does not have one government with all the power.  There are fifty individual states, each with limited power, including their representatives acting in the national government or deciding to change the Constitution itself.

And, showing how these benefits act together, sometimes individual states protect liberty more than the national government. Certain states ban the death penalty.  The federal government still provides a basic national floor of liberty, but states can protect liberty in additional ways.

Federalism also can be more efficient.

A big country is hard to govern without dividing the burden in various ways.  A basic way this is done is by giving the power to make, execute, and interpret the laws to different branches of government.  Specialization develops in each branch, allowing the executive, legislative, and judicial branch to build the skills to do their specific jobs.

Federalism is another way the government of a country is divided to advance and make things more efficient.  If you have to clean a house with three floors, it is more efficient to divide the task, giving each section of the house to a different person or cleaning crew.

Each person is still part of a whole, which joins together to address the needs of the complete house.  Likewise, federalism involves one national government overseeing the states.

If you combine the two together, states have a lot of power to threaten freedom, including by being immune from lawsuits to enforce rights. States have less people, meaning smaller majorities are necessary to do things. This includes various ways to limit our freedom.

The evils of slavery show the dangers of unlimited federalism.  Federalism requires certain limits or it can be a serious threat to individual freedom.

Voting rights is one area where national regulation (including by multiple amendments to the Constitution) has been necessary. Many argue even more national oversight is required, especially given recent court action.  The specifics here can split among ideological lines as shown by responses to recent Supreme Court cases involving guns and abortion rights.

The Preamble of the Constitution sets forth the document’s goals:

We the People of the United States, in Order to form a more perfect Union, establish Justice, insure domestic Tranquility, provide for the common defense, promote the general Welfare, and secure the Blessings of Liberty to ourselves and our Posterity, do ordain and establish this Constitution for the United States of America.

Federalism can make it harder to uphold these goals.  Federalism divides the country into different states, each with its own individual governments and interests.  State governments are inclined to focus on their own needs, less concerned about the needs of the nation.

Also, education might be assumed to be a “state” concern, resulting in a range of quality of education depending on the state.  But, education is also a national concern, and this approach leads to inequality (violating a national principle) and poor education in some areas.

The government needs to protect due process when prosecuting a criminal.  It would be easier if they did not have to follow the many steps required.  But, that is the tradeoff we accept because the alternative threatens individual liberty.  We trade some inefficiency for liberty.

The United States gives states the power to block the federal government from carrying out the powers specifically found in the Constitution. For instance, when a national background check was passed for guns, the Supreme Court held that state officials could not be forced to help.  This would require a bigger and sometimes less efficient federal bureaucracy.

The Constitution was ratified to form a more perfect union.  Before ratification, states had trade wars with each other.  There was a fear different regions were so lacking in unity of purpose that the country might break apart.  The Civil War showed the possibilities.

The Constitution balanced local and national interests in a variety of ways.  Nonetheless, federalism leaves open the possibility for conflict.  Individual states concern themselves with local concerns, the constitutional system in place encouraging them to do so.

Federalism ideally provides a means for the different states to join together and address the needs of the nation as a whole. But, as seen in recent years, political parties, divided government, and the filibuster can block national solutions.

In the 1960s, the Supreme Court held that a “one person, one vote” policy had to be followed, a system of political equality in representation.  If Georgia has one hundred people in the state legislature, each representative has to represent about the same amount of people.

This principle, however, is not completely applied because the constitutional system is set up to make this impossible.  For instance, we have fifty states, but they have a variety of sizes and populations.  Each state still has two senators in the United States Senate.  Each state still has certain powers that apply only inside its borders.

Federalism in the United States is a major reason why we have an Electoral College, instead of a popular vote for the president.  This resulted in multiple presidents being elected with fewer votes than the “losing” candidate. Also, federalism can lead to non-state areas having less rights such as Puerto Rico not having the right to vote for president.

Federalism is so basic to our view of the United States government that we speak of the “federal government” when talking about the national government.

But, the United States did not create the concept of federalism.  It was present from ancient times as seen by the practice of the Roman Empire allowing local areas a large amount of power.

Like the United States, the Romans did so for various reasons, including because their empire was just too big for the central government to rule each area any other way.

Federalism always had costs and benefits. And, HOW federalism is practiced is an important factor when balancing the two.  Keep this in mind when judging federalism as a whole.

NEED OTHER READING PASSAGES? HERE IS THE DIRECTORY FOR U.S. CONTENT

The exam below consists of 25 document-based multiple-choice questions. You can download a pdf copy for use in your classroom by clicking on the button at the bottom of the page. The pdf includes the...