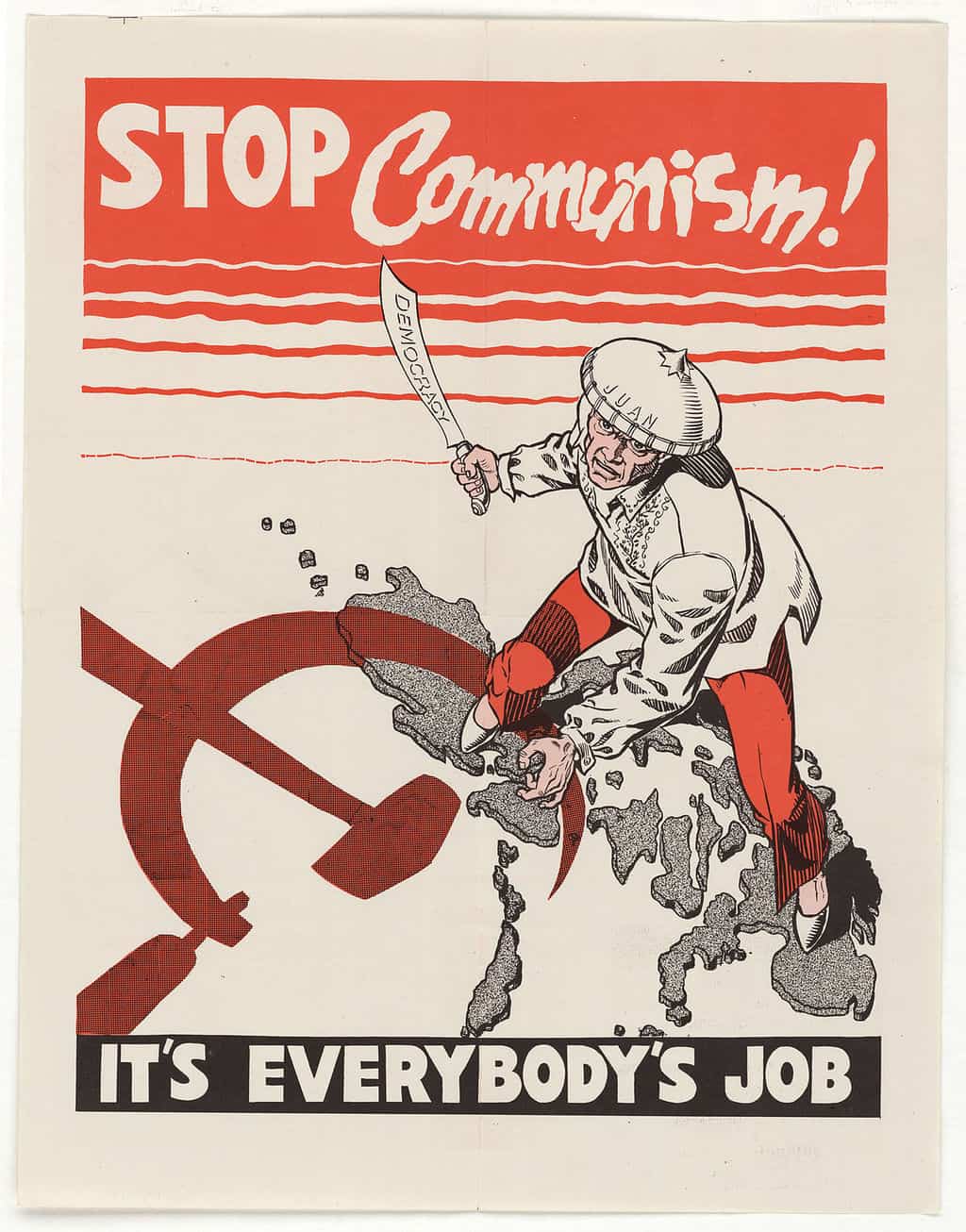 The end of wars often leads to new difficulties when handling the ensuing peace.  At times, there is a risk of even more war.  As I write this (9/21), this is quite apparent in Afghanistan.

The aftermath of WWII brought the problems of dealing with the worldwide spread of communism. The Marshall Plan (funding to rebuild Europe) and the Truman Doctrine (a policy of containment of communism in Turkey and Greece) were two ways the U.S. handled the events following the war.

World War II ended in Europe in May 1945 while Japan signed a surrender agreement in September.  Chunks of Europe were in ruins, the great powers either defeated (Germany) or devastated by the war (Great Britain and France).   Japan was also defeated while China was in the midst of a civil war that would lead to communist control in a few years.

Let us get an overall lay of the land, so to speak, of the state of things at the end of World War II and the years following.  Then, we will address the man with a plan and a doctrine.

The United Nations, an international peacekeeping organization that unlike the League of Nations the United States joined, was formed as World War II ended.  But, hopes for world peace clashed with growing divisions between former allies.  Two “superpowers” grew out of the rubble of the war — the United States and the Soviet Union.

The United States as a nation, even with the attack on Pearl Harbor, mostly avoided the direct horrors of World War II.  Its growing industrial and military might not only made it an essential part of winning the war.  The U.S.  had the means to thrive during the peace.  And, the postwar period was a thriving moment for the economy if not without bumps in the road.

The U.S. was the “West,” promoting capitalism and other “Western” values such as human rights and constitutional principles.

Their prime competition was the Soviet Union, which now controlled Eastern Europe.  The Soviet Union promoted communism, which also was destined to win out in China.

The Soviet Union also was concerned about its independence, just losing millions of people in a war with Germany.  They saw Eastern Europe, which they now largely controlled by beating Nazi Germany in a deadly war with over twenty million dead, as a buffer zone.

The Soviet Union was now ruled by Joseph Stalin, a brutal dictator that over the years led the way to the murders of millions of the Soviet people.

The Soviet Union was the “East” to the United States’ “West.”  Other nations, particularly China, also had significant power, but these two were key players in the Cold War.

Each had “satellites,” nations which they did not directly rule but had significant power over both politically and economically.  This included former colonies which over the years gained independence but had limited power.

And, there was a continual concern about who would win the “balance of power,” often using “proxies” (third parties, like Cuba) to flex their powers.  One fear was that if one nation fell, more would follow.  Like dominoes (“domino theory”).

Capitalism and communism were alternate possibilities for these nations.  Communism was raised as a promising alternative when capitalism seemed to be failing in the 1930s in the United States.  A more gentle form of capitalism was used instead.  What would happen elsewhere?

General George C. Marshall was the wartime (WWII) army chief of staff and became President Truman’s Secretary of State in January 1947.  Marshall had the year before spent a fruitless year trying to negotiate a coalition government in China between nationalists and communists.

Marshall had a good reputation as a calm, mature, and careful thinker.  He also was a good judge of ability, delegating important tasks to trusted subordinates.  Two people Marshall particularly came to rely on were Dean Acheson (who followed him as Secretary of State) and George Kennan.  Kennan was a career civil servant in the foreign office and a Soviet expert.

George Kennan believed that the United States had to take a tough stance on the Soviet Union.  In what became known as the “Long Telegram,” (it being very long*), Kennan argued that the Kremlin (the Soviet government) believed “that there can be no compromise with a rival power.”  Stalin himself saw the world being out to get them as a justification for his absolute power.

Kennan wrote an influential article in Foreign Affairs promoting what he called “containment.”  As he argued: “a long-term, patient but firm, and vigilant containment of Russian expansive tendencies” was necessary.

The Soviet Union had to be contained, its power had to be limited as much as you could reasonably limit such a large and powerful nation.  This includes limiting spreading its power to other nations.  Soviet control of Eastern Europe might not be the final stop.

This would turn out to be the U.S. policy for years to come.

* No really.  It was actually called that, being over 5,000 words, making it the longest telegram ever sent in the history of the State Department.

The first step toward containment arose out of events taking place in Greece.  Since March 1946, England had been supporting the Greek government in a civil war with communist rebels.  In February 1947, the British informed the U.S. that they could no longer afford such aid.

Marshall (wrongly) believed that the Soviet Union was involved in the civil war in Greece.

The Soviet Union was pressuring Turkey to allow them access to the Mediterranean and pressuring Iran for oil concessions.

Acheson warned the “corruption of Greece would affect Iran” and ultimately “would also carry infection to Africa through the Asia Minor and Egypt, and to Europe through Italy and France.”  That’s some set of dominoes!

President Truman was convinced that the stakes were high.  In March 1947, he gave an address to a joint session of Congress.  He asked Congress for $400 million in military and economic assistance to Greece and Turkey.  And, stated what became known as the Truman Doctrine:

I believe that it must be the policy of the United States to support free peoples who are resisting attempted subjugation by armed minorities or by outside pressures.

I believe that our help should be primarily through economic and financial aid which is essential to economic stability and orderly political processes.

(A “doctrine” is a principle of government policy such as the Monroe Doctrine.  My mom is very principled as well.  When we complained she was worried about a small matter, she regularly said: “it is the principle of the thing!”  Governments can have the same sentiment.)

The “outside pressures” were particularly a reference to the Soviet Union. The principle of containment was now official U.S. policy.  The Cold War had unofficially begun.

Hot vs. Cold War: A “hot war” is a military engagement, thus the saying the “heat of battle.”  A “cold war” would be a state of conflict between two countries, if not directly being at war with each other.  Recall that the Soviet Union would soon have major nuclear capabilities.

Nuclear war could make that metaphor quite literal.)

Shortly after Truman’s speech to Congress, George Marshall proposed a European-wide aid package.   In a Harvard commencement speech  (multiple big speeches around then; Winston Churchill spoke of an “iron curtain” surrounding Europe during a speech too), Marshall promised aid to all of Europe, including the Soviet Union (!), if they all could reach an agreement on:

As Admiral Akbar from Star Wars might say, Stalin said, “no, way! It’s a trap!”  Stalin, maybe honing in on “free institutions,” saw the “Marshall Plan” as a way to weaken the Soviet’s control of Eastern Europe.  The Eastern European countries were not allowed to take part.

The other European countries said “hey, we are fine with the idea!” and made a formal request for $17 Billion.  Congress was wary.  Marshall sold it as not just as a way to check the Soviet Union, but to improve trade relations with European countries.

When communists took control of Czechoslovakia, Congress quickly came on board.

The whole thing was a big success, the U.S. ultimately giving or lending Western European nations around $13 Billion.  The threat of a communist takeover of Western Europe faded and the region underwent a major economic revival in the 1950s.

There is some debate about how important, as a percentage of the countries’ economy, the money was to this revival.  But, it is much more clear that the money promoted economic and political alliances between the U.S. and Europe.

Marshall himself won the Nobel Peace Prize in 1953 for his efforts.

It is likely that the U.S. and Soviet Union were going to be major rivals after WWII no matter what.  But, the Truman Doctrine and Marshall Plan worked to increase the divide.

A point of no return also occurred when the Soviet Union set up a blockade of Berlin, which was then divided into American, British, French, and Soviet sectors.

Berlin was isolated, over a hundred miles within East Germany, the Soviet-controlled portion of the country.  The U.S. resisted with a gigantic airlift of food and supplies (Berlin Airlift).

The Soviet Union ended the blockade. The United States had a major victory without the use of military force.  But, it was a sign of what the Soviet Union was willing to do.

In a few years, the United States and Western Europe would organize into a formal military alliance under the North Atlantic Treaty Organization (NATO).  The Soviet Union responded with the Warsaw Pact with Eastern European nations.

By the 1950s, the scars of World War II were much less apparent in Western Europe with the help of U.S. aid, including the Marshall Plan.

The U.S. was also firmly promoting a policy of containment of communism worldwide, including intervening in a civil war in Korea and later in Vietnam.  The Cold War was in full swing.