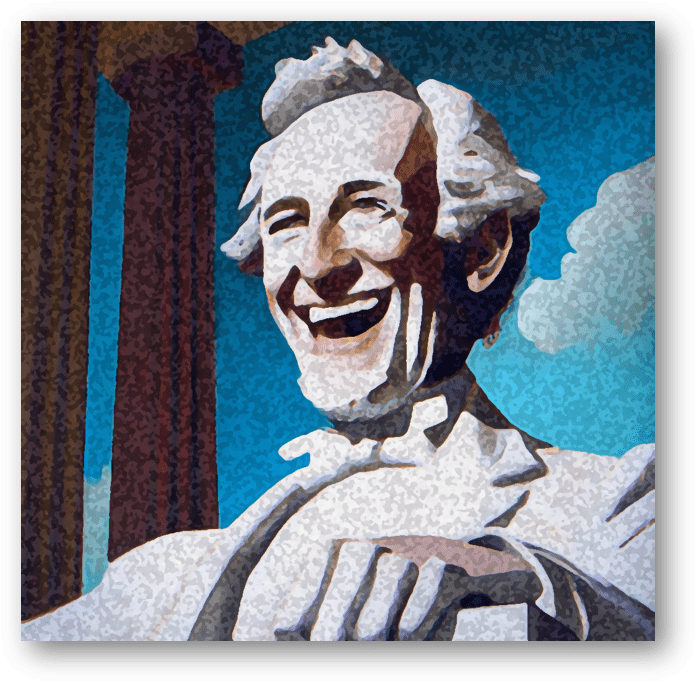 Throughout its history, the United States has had its share of presidents who were known for their sense of humor. Humor can be a valuable tool for leaders, helping them to connect with the public, defuse tension, and even inspire change. A few that make the cut (in chronological order) are Presidents Lincoln, Roosevelt, Kennedy, Reagan, and Obama. There are also distinctly unfunny presidents. President Nixon probably gets the trophy.

Abraham Lincoln, the 16th president of the United States, was known for his quick wit and humorous storytelling. He was famous for his funny anecdotes and jokes, which he used to entertain and disarm his opponents. One of his most famous jokes was,

“If I were two-faced, would I be wearing this one?”

Lincoln’s sense of humor was a way for him to cope with the challenges and stresses of the presidency. As president during the Civil War, it’s fair to say there were stresses!

President Abraham Lincoln famously said, “It’s better to be silent and be thought a fool than to speak and remove all doubt.” He also once joked, “I don’t know who my grandfather was; I am much more concerned to know what his grandson will be.”

Theodore Roosevelt, the 26th president of the United States, was known for his energetic and outgoing personality. He was an avid outdoorsman and loved to tell jokes and stories. He once said, “I don’t mind a good story myself if it’s a good one, but the trouble is that most of the stories you hear are so darn bad that they hurt.”

Roosevelt’s sense of humor helped him to connect with people and to defuse tense situations.

One of President Roosevelt’s favorite jokes was,

“Whenever I hear anyone arguing for slavery, I feel a strong impulse to see it tried on him personally.”

He also once said, only half-joking, “Speak softly and carry a big stick; you will go far.”

When asked how he managed to balance the demands of his job with his personal life, Kennedy famously replied, “With difficulty.”

Kennedy’s sense of humor was a key part of his charisma and helped him to connect with people. He famously said, “Victory has a hundred fathers and defeat is an orphan.” Humorous, but also true!

President John F. Kennedy was known for his wit when responding to reporters’ questions. Once, when asked how he planned to balance the federal budget, he replied, “I’m not much of an accountant.”

He also famously responded to a question about the agricultural problems in America by saying, “I’m sorry, I don’t know anything about farming. I do know you can buy a cow in Connecticut for two dollars and in Texas for six dollars. So figure it out yourself!”

This one about his father is my favorite:

“When we (The Democrats) got into office, the thing that surprised me most was to find that things were just as bad as we’d been saying they were.”

President Ronald Reagan, Actor through and through

Many people would agree that the funniest U.S. president of all time was Ronald Reagan. He had a reputation for cracking jokes and disarming tensions through his use of humor, often to great effect.

From giving bear hugs to world leaders to sharing anecdotes about life in Hollywood, Reagan’s wit and charm endeared him to many and made him one of the most beloved presidents in American history – at least for republicans.

The ability to joke around in the face of danger is a rare talent. After being shot in the chest by an attempted assassin, John Hinkley, Junior, then-President Reagan famously cracked a joke to his wife Nancy, saying “Honey, I forgot to duck.” This was indicative of Reagan’s sense of humor and strength even in the face of adversity. He then went on to say to the surgeons as he entered the operating room:

“I hope you’re all Republicans.”

Barack Obama, the 44th president of the United States, was known for his quick wit and ability to deliver a punchline. He was a regular guest on late-night talk shows and was known for his humorous speeches and appearances.

Obama once joked, “I’m not the strapping young Muslim socialist that I used to be.” His sense of humor helped him to connect with people and to defuse tense situations.

He also quipped in response to a reporter asking him what he was most proud of during his time in office: “I’m proudest of the fact that I didn’t have a scandal! At least none that I know of.”

”If I had to name my greatest strength, I guess it would be my humility. Greatest weakness, it’s possible that I’m a little too awesome.”

A quotable comment on the press from President Obama, ”I love the press. I even sat for an interview with Bill O’Reilly right before the Super Bowl. That was a change of pace. I don’t often get a chance to be in a room with an ego that’s bigger than mine.”

The next joke is my favorite. It’s hard not to slap your knee at this truism:

Overall, these U.S. presidents used their sense of humor as a way to connect with the public, defuse tension, and cope with the challenges of the office. While being a president is a serious and demanding job, it’s important for leaders to have a sense of humor and not take themselves too seriously.

It is difficult to accurately assess the sense of humor of U.S. presidents, as humor is a highly subjective matter and can be influenced by a variety of factors. Moreover, the role of the president is a serious and demanding one, and it is not uncommon for presidents to prioritize their duties and responsibilities over cracking jokes. That being said, here is a list of some U.S. presidents who are generally regarded as having had a less prominent sense of humor:

As the first president of the United States, Washington set the tone for the office and is known for his serious and dignified demeanor. While he was known to have a dry wit and could be playful with his close friends and family, he was not known for his public sense of humor.

In his defense, Washington was known to struggle with his false teeth. This was before dental implants and just talking could be difficult!

Monroe, the fifth president of the United States, was known for his serious and formal demeanor. He was respected for his integrity and affable manner he’s not generally remembered for his sense of humor.

Wilson, the 28th president of the United States, was known for his serious and studious approach to his duties and is not generally remembered for his sense of humor.

He was president at the beginning of the Great Depression, so there really wasn’t much to laugh about. Unfortunately, some believe his policies during this time were laughable to the point of tragic.

Nixon, the 37th president of the United States, is not generally remembered for his sense of humor. In fact, he was known for his gruff and serious demeanor and his presidency was marked by several major controversies and challenges.

Generally speaking, Nixon will go down in history as paranoid and perhaps the antithesis of funny.

It is worth noting that while these presidents may not be remembered as particularly funny, they all made significant contributions to the United States and are remembered for their leadership and accomplishments.

CLICK HERE FOR A PDF COPY OF THIS ARTICLE

link to Which American Presidents Had Bad Childhoods?

Childhood is an important part of our life story, including influencing who we become as adults in various ways. It is important to examine the childhood of public figures, including American...