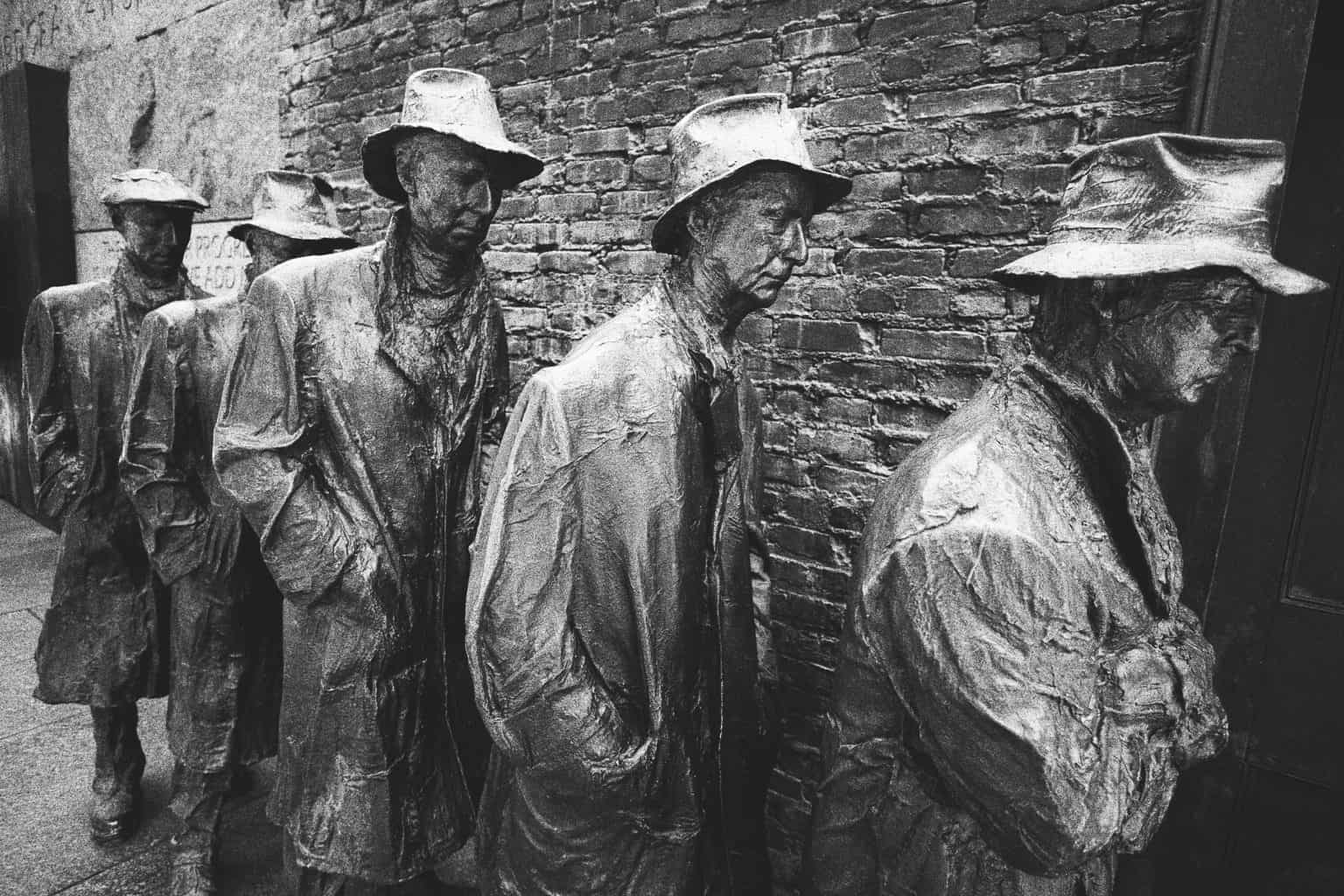 A “depression” in the financial context describes a long period of declining economic activity. This can mean a period of six or more months; the “Great Depression”  started in 1929 and only ended with the start of World War II over ten years later.  The result was great suffering as well as great change.

A depression is an extended economic downturn, so it is helpful to look at events as a matter of history.  Black Tuesday (10/29/1929) is so named because there was a sudden decline in stock prices (a stock market crash), but no one event caused an extended economic downturn that lasted over a decade.  There were a series of events that acted together in a way still debated. The general trend is apparent.

Historians and economists cite various causes of the Great Depression. The 1920’s was a time of great innovations and economic growth. Average families were buying radios, washing machines and toasters. Factories were producing huge amounts of consumer goods. The stock market was rising steadily. Even working-class people were investing. Unfortunately, a lot of this spending was being done on credit. Factories began overproducing goods. And the stock market was unregulated, encouraging many types of abuses. These problems built up and few noticed. That is until the stock market crashed and unemployment quickly soared.

Farmers, even before a series of droughts in the Midwest that turned soil to dust in the 1930s (Dust Bowl), were already struggling. Thousands of families were forced to abandon their farms and migrate out west to California in the hopes of getting jobs there.

The pro-business and limited government policies that seemed appropriate in other times made it difficult to push through big responses to the continuing economic problems. This included relief efforts, largely seen as a local function such as local soup kitchens and breadlines.  Some responses also worsened the situation such as the Smoot–Hawley Tariff Act, which raised tariffs (taxes)  to encourage domestic manufacture but resulted in retaliation that worsened the situation.

Many blamed President Hoover for the Great Depression, homeless shantytowns nicknamed “Hoovervilles.” Thousands of World War I veterans and supporters formed a “Bonus Army,” marching on Washington to demand relief and an early payment of bonus money due to veterans.  The Bonus Army set up camps in the nation’s capital in 1932 and federal troops were sent to remove them.

The failures of President Hoover and the Republican Party overall to address the Great Depression led to great successes (a landslide) for Democrats, including a new president (Franklin D. Roosevelt)  and majorities in both houses of Congress.  This provided a mandate, one that only grew when he was re-elected in 1936.

The new president, nicknamed FDR, promised a New Deal, a series of laws to help the country to recover from the Great Depression.  This included a series of moves in his first hundred days in office such as a bank holiday, a temporary shutdown of banks to help stabilize the banking system.

A great expansion of the federal government occurred, involving a range of laws and new federal agencies to apply them. This included laws regulating stock markets, banks and businesses.  Efforts, including public work projects, were provided to serve the needs of ordinary Americans.  A major piece of legislation here was Social Security, a program of old age pensions, unemployment and disability insurance.   Early on, the Supreme Court held many policies went too far, were unconstitutional, but eventually overall accepted the new path.

FDR also made good use of the radio, giving many so-called fireside chats to talk directly to the nation. This included promoting a failed attempt to expand (pack) the Supreme Court to insure they would uphold New Deal policies.  The New Deal resulted in changes and policies that still are with us today.  They help prevent such a harsh depression from occurring again.  Nonetheless, it took the expansion of the economy arising from World War II to end the Great Depression itself.