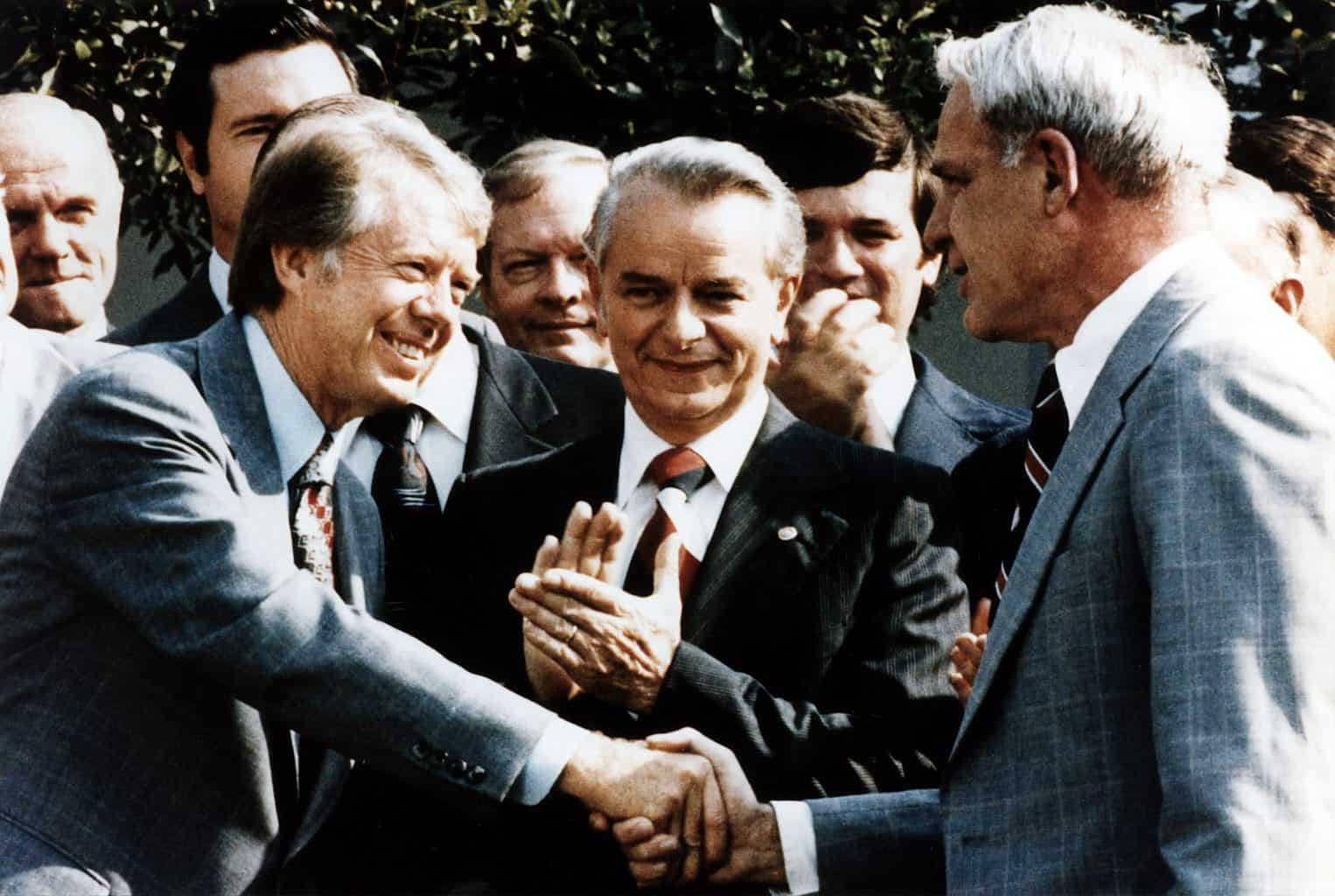 Below is an overview of the Carter Administration. It is available to download as a PDF copy for yourself. If you need a digital copy there is a Google link provided as well.

Jimmy Carter started off in state politics, gaining a reputation as a symbol of the “New South” in the Civil Rights Era. Carter promised to bring a fresh look to the presidency though had a problematic administration, failing to be re-elected.  His fame particularly came from his post-presidential work that continues to this day.

James “Jimmy” Carter was born in Georgia in 1924.  His father was a successful businessman and land owner and his mother was a nurse.  Carter went to the United States Naval Academy at Annapolis and worked on nuclear submarines.  He resigned to take care of the family business when his father died.

Carter went into Georgia state politics in the 1960s, eventually becoming governor. Carter is a Democrat.  He obtained national attention as a symbol of the “New South,” a member of a new breed of politicians known for their moderate racial views and progressive economic and social policies.

Carter ran for president, promising to return honesty and values to the White House after the years of the Watergate scandals.  He benefited from being an outsider and coming for the South, an important voting bloc in the last two elections for the Republican presidential wins.  Carter chose Sen. Walter Mondale as his running mate.  He won a close election against President Gerald Ford.

President Carter’s outsider status caused problems when he tried to work with the Democrats in Congress.  Carter also had personality clashes with the members, gaining a reputation as a prickly personality that tried to micromanage.

This hurt his attempts to deal with a variety of domestic problems.  For instance, it was a period of both high inflation and unemployment known as stagflation. Problems in the Middle East also led to an energy crisis, including concerns about fuel shortages. Carter did more successfully promote diversity in his nominations, including for judicial positions.  Two of his judicial nominees (Stephen Breyer and Ruth Bader Ginsburg) later became Supreme Court justices.

Carter promoted human rights as an important part of his foreign policy.  His biggest success came when he brokered a peace deal between Israel and Egypt  (Camp David Accords).   Carter also negotiated a deal to transfer the control of the Panama Canal back to Panama.  He also signed a bilateral strategic arms limitation treaty (SALT II) with the Soviet leader Leonid Brezhnev. On the other hand, the Soviet Union’s invasion of Afghanistan caused a major setback.

Carter’s biggest failure was dealing with a revolution in Iran in which the old U.S. friendly government was overturned in favor of anti-American religious leadership.  Iranian students attacked the U.S. Iranian embassy and seized fifty-two hostages, known as the Iran Hostage Crisis. Attempts to free the hostages failed and they were only freed once Carter left office.

The Iran Hostage Crisis (1979-81) as well as economic problems made Carter very unpopular. The Republican candidate for president was Ronald Reagan, a popular former actor and governor of California, who put a positive face on a conservative message that was growing in popularity.  Reagan won the presidency.

Carter was only in his 50s when he was defeated. He had a successful post-presidency, promoting human rights around the world and also built homes for the poor with the organization Habitat for Humanity.  Carter won the Nobel Peace Prize for his efforts.  Carter is greatly motivated by his religious faith and wrote many books expressing his beliefs.   He has continued his efforts up to the present day.  It might be said he was most successful as a former president.

Prior to Carter the president was President Ford.

President Carter was proceeded by President Reagan, a president with very different policies.

For close read ideas to implement with this reading check out the tips here.