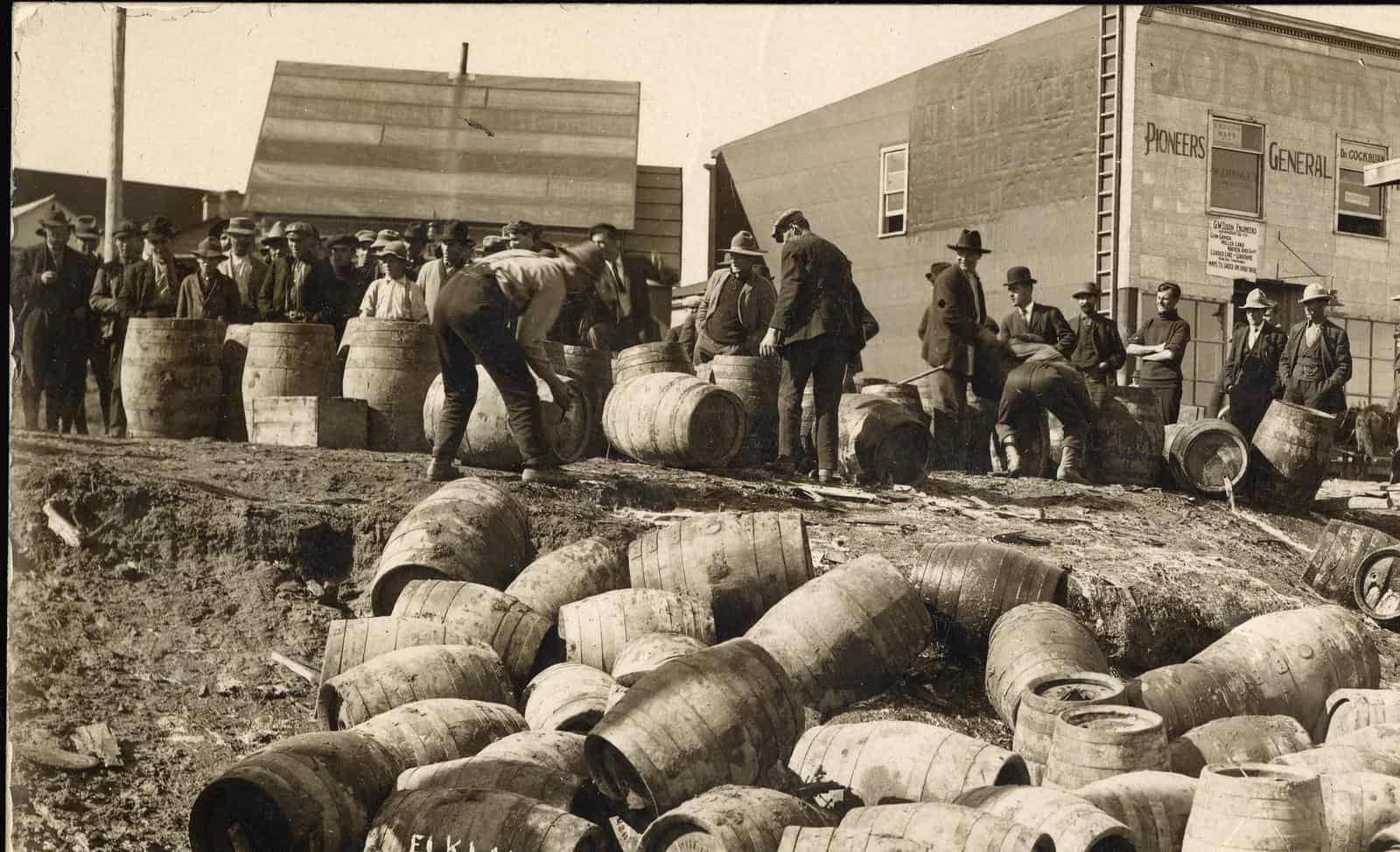 The manufacture, sale, or transportation of alcohol for beverage purposes was illegal in the U.S. in the 1920s.  Many now think this “Prohibition” was a failure.  But, there were many arguments for and against Prohibition.  And, it was not totally a failure.  It’s all complicated.

Alcohol Use Over Time

A constitutional amendment that put in place a national ban on the liquor industry now probably seems a bit absurd to most people.

In the early years of our nation, before modern means to purify water and pasteurize milk existed, alcohol was often the safest drink available. Coffee and tea were expensive. Alcohol’s importance is shown in such historical events such as the Whiskey Rebellion and rum being a major part of the international slave trade.

The temperance movement developed to address alcohol abuse.  It was part of a wider effort to reform in 19th Century society.  This overall movement included fights against prostitution, supporting education, and opposition to slavery.

The reform movement had a strong moral and religious component.  “Demon rum” and similar metaphors were used to argue that alcohol “enslaved” people.

Reform movements provided an opening for women to take part in public affairs.  Temperance was particularly personal to them. Heavy alcohol use could mean their husbands and fathers not being able to properly take care of their families.  This could include domestic violence. Women at this time also had much less rights over finances or the ability to divorce.

“Temperance” suggests limits, not a total ban.  But, in the 19th Century, around ten states did totally ban the sale of alcohol.  This was a long way from a national ban.

The early 20th Century, however, provided an opening.

Already a big moment for progressive reform — multiple constitutional amendments such as the income tax were ratified.  World War I provided one more push.

The production of alcohol was banned during the war to conserve grain for American soldiers.  Anti-German sentiment made beer at times almost seem anti-patriotic.  And, war is usually a time when government restrictions are deemed more acceptable, including those handed down by the federal government.

The Prohibition Amendment (the 18th) was proposed while the U.S. fought WWI and was ratified shortly after it ended.  The amendment did not ban possession of alcohol.  And, it was allowed for medical and religious use.  But, the rest was prohibited. To quote the amendment:

After one year from the ratification of this article the manufacture, sale, or transportation of intoxicating liquors within, the importation thereof into, or the exportation thereof from the United States and all territory subject to the jurisdiction thereof for beverage purposes is hereby prohibited.

Some people thought the term “intoxicating liquors” would not be applied to beer or wine. But, the Volstead Act, passed to enforce the amendment, broadly banned all alcohol with more than .5% proof.  That’s most of it.  And, Congress overrode a presidential veto to pass the law.

After all, forty-five of the forty-eight states then existing eventually ratified the amendment.  There appeared to be broad support for a strong Prohibition policy.  Why?

There were multiple groups that supported Prohibition.  They had a variety of concerns that overlapped, allowing them to form a successful movement to ratify the amendment.

Many people thought that alcohol abuse was a major threat to public morals.

These people often had strong evangelical Christian beliefs, feeling a strong need to spread their beliefs and reform society.

They also often lived in rural areas.  Urban areas, especially those with thriving saloons, were seen as havens of immoral activity.  Opposition to liquor at times had an anti-immigrant flavor as a result, since immigrants populated cities.  Irish and German immigrants, many of whom were Catholic (evangelicals were generally Protestant), were the most against Prohibition.

Women were also a major part of the pro-Prohibition coalition, including members of such groups as the Woman’s Christian Temperance Union (WCTU).

The WCTU shows how different groups overlapped.  The opposition to alcohol went beyond those with a religious motivation.  And, it was part of a wider whole.  For instance, the WCTU had a combined platform that supported prohibition of alcohol, women’s suffrage (voting), and progresssive reforms such as the income tax and direct election of senators.

Alcohol was argued to be the cause of various social problems for which women had a special reason to find troubling. Women were particularly concerned about how alcohol abuse was a problem in domestic life.  A worker’s abuse of alcohol was not just a matter of inefficiency or dangerous to public safety.  The worker is someone’s father or husband, the head of the family.

Progressives, those who were interested in the reform of society, also saw alcohol as an important problem.  Progressives supported a more efficiently run society.  And, they were willing to pass laws that restrict people in certain ways to advance this efficiency.

Progressives also thought saloons were a public menace.  They promoted alcohol abuse and made it harder for new immigrants to become good American citizens.

And, alcohol was seen as a public health problem, particularly for the urban poor.

Prohibition did result in a strong reduction of alcohol usage, perhaps as much as thirty percent.  This included a drop in liver cirrhosis deaths, a key sign of alcohol abuse.  Yes, those that did drink often drank more dangerous liquor.  But, there was still a net decline in alcoholic abuse.

The U.S. did not return to pre-Prohibition drinking levels until the 1970s.

There were various arguments against Prohibition. The arguments grew in popularity during the 1920s as people experienced Prohibition in action.

Federalism is a basic concern in our constitutional system of government.

The Constitution was ratified because it was understood that we need a stronger national government.  But, the states still had a lot of power, including over alcohol usage.

It all seemed too much to some people.  Many were fine with prohibition on a local level as was the case in many states.  But, a national ban invaded (in their view) the proper roles of the states.  And, it was just one part of a wider expansion of federal power that many opposed.

Many people, especially certain immigrant groups, liked to drink.  A ban on liquor sales was seen as a basic threat to personal liberty.  This includes those who enjoyed saloons, often the major reasonably priced and ethnically friendly meeting place for many people.

Also, it seemed racist, since there was an anti-immigrant thread in support for Prohibition.

The enforcement of Prohibition would also threaten civil liberties.  For instance, the Supreme Court held in Olmstead v. U.S. that electronic eavesdropping (in a case involving illegal smuggling of alcohol) without a warrant did not violate the Fourth Amendment.

Prohibition was argued to be a major threat to property rights in general.  A major industry was being destroyed.  As with federalism, this at times particularly concerned conservatives, including those who opposed governmental control of business.

The liquor industry provided a major source of revenue.

If you banned the sale of liquor, you would make a major industry against the law, except for the limited exceptions to the ban.  This would deprive people of a major means of employment.

Also, it would deprive the government of a major source of revenue.  One analysis that I found perhaps somewhat tongue in cheek listed all the “underground” economic actors, including bootlegging, that benefited.  But, even then, a major loser is Uncle Sam.

There was also an argument that it simply would not be possible to enforce Prohibition. And, when you did, it would lead to a variety of problems.  Experience, including the rise of organized crime (including such famous people like Al Capone), seemed to show this to be accurate.

The problems of enforcement would also lead to disrespect of the law.  The government not only seemed to be unable to control illegal alcohol sales, but often took part by taking bribes.

Those who have studied the matter partially provide an answer to such concerns.  It is true that Prohibition led to some disrespect of the law and government abuses.  But, blaming the rise in crime in the 1920s on Prohibition is a more dubious matter.  Changes in society generally could explain much of the rise in crime.  How much Prohibition factored in is unclear.

And, Prohibition did reduce some crime.  For instance, a reduction in alcoholic usage led to the drop of various crimes related to alcoholic abuse, including domestic violence.

Opposition to Prohibition increased as the Great Depression began.

Prohibition no longer could be said to be behind the thriving economy.  Wouldn’t the liquor industry not only give people work, but provide an important influx of tax dollars?

Plus, immigrants who supported the end of Prohibition were a more important part of the Democratic Party, who won the presidency.  And, alcohol might let the bad times go down a bit easier.  Talkies (films) about mobsters were also a sign of how Prohibition seemed to be failing.

The uptick of opposition ultimately led to the passage of the Twenty-First Amendment, which overturned the national ban, but allowed individual states to ban liquor if they so desired.

The 21st Amendment left open the ability of local areas to ban alcohol.  “Dry” areas did continue.  But, as a whole, the production and sale of alcohol returned on a national level.

The problems with alcohol usage continued.  Each group in support of Prohibition continued to address its usage in other ways.  For instance, the Mothers Against Drunk Driving (MADD).

A total ban of alcohol sales, however, failed as a national policy.  The experience and debates continue to influence other prohibitions, including bans of certain drugs.

Each area has its own particular differences, but the Prohibition provides important insights all the same.  What do you think?