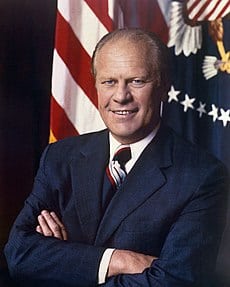 Below is a summary of the Ford Administration. It is available to download as a PDF copy for yourself. If you need a digital copy there is a Google link provided as well.

The Twenty-Fifth Amendment was passed in the mid-1960s to deal with mid-term vacancies of the vice president and president.  Gerald Ford would soon fill both roles, never elected by the country at large, tossed in at a troubling time as well.

Leslie Lynch King Jr. was born in Nebraska in 1913, but his mother soon divorced and married Gerald Ford.  His stepfather adopted him and the son took his name, becoming Gerald Ford Jr.  Ford grew up in Michigan, served in World War II, and in 1948 began a twenty-five year stint in the House of Representatives.

Ford gained a reputation as a friendly, honest, loyal and hardworking Republican, ultimately becoming House Minority Leader.  He married Elizabeth (Betty) Warren, who played an active public role of her own, gaining a reputation as being more liberal minded than her husband. She was also public about her alcoholism and substance abuse, later founding the Betty Ford Clinic to treat addiction.

After President Nixon easily won re-election in 1972, a series of events rocked his presidency.  Most well known is the Watergate controversy, arising from illegal attempts to interfere with the 1972 election and later cover-ups.

But, separate from this was the corruption of Vice President Spiro Agnew, forcing him to resign.  President Nixon, under the terms of the 25th Amendment, appointed Gerald Ford to replace Agnew. Ford’s reputation of honesty and integrity led the Democratic controlled Congress to accept the choice.  And, eight months later, Nixon himself resigned, making Ford now the President of the United States.

President Ford was sworn into office on August 9, 1974.
Ford thought it very important to regain the public’s faith in their leaders and particularly the office of the presidency.  He then did something that many saw as conflicting with this goal.  Ford made the controversial choice to pardon Nixon, before he was prosecuted, of all crimes.  Ford believed this was necessary to allow the country to heal and move past Watergate, but many opposed the choice.

Ford oversaw the final evacuation of U.S. forces from Vietnam, which fell to North Vietnamese forces in 1975.  Ford also began the process of pardoning dodgers of the draft, which was completed during the Carter presidency. Ford helped to reduce tensions with the Soviet Union by signing the Helsinki Accords.  Ford, like Nixon, visited China to help U.S.-Chinese relations. He also had to deal with continual conflicts in the Middle East.

Ford faced a domestic energy crisis and a weak economy marked by high inflation and unemployment.  His “Whip Inflation Now” (WIN) campaign was ridiculed as a publicity gimmick.  The Republican Ford had trouble dealing with a Democratic Congress, vetoing sixty-six bills.  He did support the Equal Rights Amendment for sexual equality.  Ford’s most lasting legacy was the appointment of John Paul Stevens to the Supreme Court, Justice Stevens serving for thirty-five years.

Gerald Ford (and his Vice President, Nelson Rockefeller) ran for election in his own right against Jimmy Carter.  Economic problems and his pardon of Nixon factored into Ford losing in a close race.  Ford thought  about getting back into politics, but ultimately stayed retired from public life, dying in 2006.