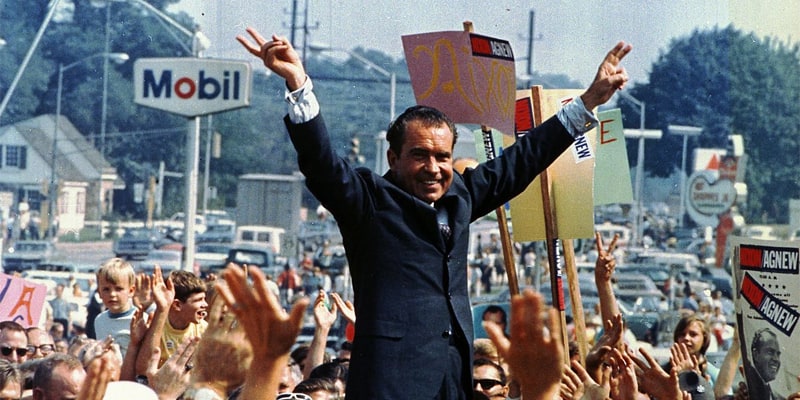 Richard (Dick) Nixon was in some ways a conservative version of John F. Kennedy, both serving in the navy during World War II and running for president in their forties. Both needed to learn how to use television to their advantage. But, from the early years in Nixon’s public life, there was also a dark side.

President Nixon was elected twice but resigned during his second term. The 1960s was the first decade that television played a major role in politics. Nixon felt the pain and benefits of this new marketing medium in the Kennedy debate (pain) and his Checker speech (benefit). His foreign policy faced the same opposing fates – he was a hero in China and villain in Vietnam. Ultimately his legacy would be of a president that caused Americans to forevermore question the veracity of politicians.

Richard Nixon was born in California in 1913 and had to work hard to get ahead, coming from a family without much money.  He worked at his father’s grocery store during college and later served in the navy during World War II.

After the war, Nixon entered politics, becoming well known for his strong anti-communistic beliefs.  In 1952, Eisenhower chose him as his running mate, and Nixon was vice president for two terms.  During the 1952 campaign, Nixon gave a famous speech (Checkers Speech) to emotionally respond to allegations of an inappropriate secret fund supporting his campaign. The speech is named after a dog (Checkers) given to him by supporters that he gave to his daughter.

Nixon lost to John Kennedy in a close presidential election (1960), but won in 1968.  The election was a three-way race between Nixon, President Johnson’s vice president Hubert Humphrey and Governor George Wallace.

Wallace appealed to those uncomfortable with the 1960s, including civil rights and concerns about rising crime.  Nixon provided a more moderate conservative message as well as a promise to find a way to get the U.S. out of Vietnam in a dignified way.

In 1969, Neil Armstrong became the first man to walk on the moon, and Nixon was able to talk to him during the historical moonwalk.

But, that isn’t quite the “foreign” policy at issue here.  Nixon’s biggest foreign policy success was his ability to visit Communist China, negotiating with Chinese leader Mao Zedong to improve U.S.-Chinese relations.

People were particularly impressed that Nixon, known for his strong anti-communist beliefs, was able to “open” China after years of it being shut off from the United States. Nixon’s National Security Adviser, Henry Kissinger, played an important role here as well.

Nixon’s strategic moves in Vietnam were not as successful. After first increasing bombing, Nixon supported removing U.S. forces from the region and letting the South Vietnamese fight the war alone.

Nixon’s moves here were controversial, including bombings that many in Congress felt were illegal.  Nixon also tried to stop newspapers from publishing the Pentagon Papers, a secret critical look at the war.  The Supreme Court blocked this effort.  North Vietnam ultimately won the war.

A key issue here was a burglary of the Democratic headquarters in the Watergate hotel by men connected to the Nixon re-election campaign.  The burglars successfully broke into the offices, took photographs of secret documents and placed wiretaps on the phones.  A second break-in, however, was discovered.  The burglars were arrested, leading to a firehose of negative publicity for Nixon.

Over time, both as a result of investigative reporting by newspapers and public investigations, more and more evidence came out.  The break-in was part of a wider effort and the Nixon Administration tried to cover it up.  When the Supreme Court held that Nixon had to supply damning “smoking gun” tapes, recordings of White House conversations, he decided it was time to resign.

Vice President Gerald Ford in August 1974 became president.  Ford, in a move many opposed, later completely pardoned Nixon for any crimes he might have committed.  Ford believed that this was necessary to help the country move on from Watergate.  Richard Nixon died in the 1990s, staying active in public life until then.

WANT A PDF COPY OF THIS ARTICLE?