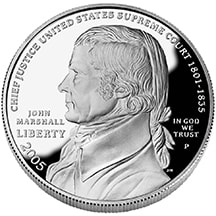 The Supreme Court of the United States in an important sense truly “arrived” when it handed down Marbury v. Madison (1803). Chief Justice John Marshall not only clearly established the principle of judicial review but did so in a crafty fashion that carefully handled the various legal and political complexities involved.

The First Congress, with many people who worked on the Constitution as members, passed the Judiciary Act of 1789 to fill in various details regarding the courts. President Washington, who presided over the Constitutional Convention, signed it into law. An update was passed at the end of the presidency of John Adams, in part adding new judges and other court personnel such as justices of the peace.

The new law allowed President Adams, a Federalist, to fill many positions before incoming President Jefferson, a Democratic-Republican, came into power. At about the same time, John Marshall was also confirmed as Chief Justice.  Marshall was then President Adams’ Secretary of State, one of his duties being to make sure commissions (written notifications that someone was given a position) were delivered.  Marshall remained as Secretary of State to the end of Adams’ term.

The law was passed so late that President Adams nominated a bunch of people to fill the new positions with only two days left in his term. His political opponents denounced these as “Midnight Judges,” inserted at the last moment to allow the losing party to retain power.  The whole thing was so last minute and rushed that some of the official commissions were not delivered when Adams left office.

President Jefferson told his own Secretary of State, James Madison (whose important role in its formation led to him to be named the “Father of the Constitution”) not to deliver some of the commissions.  Jefferson believed that he had the power to do so, the people not officially having the right to hold the office until the commission was delivered.  A few people denied a commission, including William Marbury, sued using a method found in the Judiciary Act of 1789.  Thus, we have the court case at hand: Marbury v. (versus or against) Madison.

The lawsuit was part of a wider political dispute involving the new judicial legislation and the courts in general. The courts were very important, and each political party had a different view about their proper role.  Also, if the Supreme Court did agree with Marbury, would Jefferson agree to give Marbury his commission?  How could the courts force him, when as Alexander Hamilton (if not in song) noted, judges had neither the power of the purse (money) or sword?

Chief Justice Marshall in his opinion carefully handled all of these concerns.  Marbury did have the right to his commission, actual delivery not required, and Madison did have a duty to deliver it.  But, the means used by Marbury to try to get it was improper.  The special type of legal order authorized by the law gave the Supreme Court a power not authorized by the Constitution itself. The Supreme Court was unable to order Madison to give Marbury his commission.

The Supreme Court has the special duty to interpret the law, including the Constitution, the supreme law of the land.  If a lesser type of law, such as a law Congress passes, violates the Constitution, the Constitution wins.  This power of the courts to decide that a law is unconstitutional, violating the Constitution, is known as judicial review.  Marshall carefully established an important power but in such a way that the case itself actually limited the Court’s power.  It was a rather clever solution, basically losing a battle while winning long term.