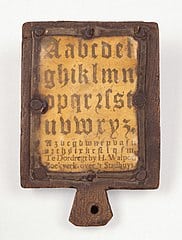 Hornbooks were a popular children’s teaching aid from the 1400s to the 1800s. They were made of various materials and built into the shape of a paddle with a protective coating.  Hornbooks were commonly used to teach basic lessons such as the alphabet and prayers.

Education (and students grumbling about it) has been an important part of American life since colonial times.  New England colonies particularly wanted children to have a basic ability to read and write to be able to understand the Bible.  In addition, education was a priority allover.

Learning often was done at home with parents teaching their children the basics (reading, writing, and a-rithmetic — the three ‘rs’ for those with a somewhat loose way of spelling).

You would usually start learning with a “primer,” a first textbook, to learn your alphabet and other basic lessons. There were early books available particularly targeted to children, including storybooks.  SOmetimes a common primer to start things off was also known as a “hornbook.”

Word Fun: “Primer” is also something used in painting.  A primer is the first layer of paint put on as a base.  Star Trek fans should know about the “prime directive,” the FIRST rule the Federation  (except for Captain Kirk much of the time) should follow.

Before printing, individual books had to be handwritten.  Johannes Gutenberg invented the printing press in the mid-1400s.  This was a major turning point in the spread of knowledge and a major reason the Protestant Reformation was successful.

Printing allowed the mass production of books and other reading material. The printing press was also important for the development of the Renaissance, the rebirth of Europe.

Writing materials (paper, animal skins, and sometimes other things) were still expensive for the average person.  A family often only had at most a few books, oftentimes only their family bible.

A cheaper means to spread information, including on small pieces of paper, would be one means for the less well-off person to be better able to take part in the new information age.

The First “iPads” Are Invented

You might be reading this article on your personal iPad or whatever the newest thing is.

The iPad provides you with a convenient-sized, easy to hold and durable source of information.  You can read a specific “page” of information, without carrying around a whole book.

Hornbooks, first used in the 1400s, were the first iPads.

Don’t believe me?  This website shows you how to make one yourself.  Look at the photo.  Looks like a Kindle to me!

The costly price of writing materials led to the use of various cheap items for “scrap” paper and writing materials in general.  For instance, pieces of pottery were used in ancient times as writing surfaces to keep short messages.  Pieces of wood also were used over the years.

Hornbooks developed from this basic concept.  Hornbooks could be made of many things, but the basic core of this “primitive iPad” was a wooden paddle.  A hole often was drilled into the handle, providing a means to easily attach it to your belt or hang it up on a nail.

(The paddle construction of the hornbook provided it a “dual use” function as an education device. The troublesome student might be “taught” with one in a particularly painful way.  Corporal punishment, including paddling, was more accepted in the early years of education.)

How to Use a Hornbook

A piece of parchment (sturdy writing material made from animals) or paper was attached to the wooden paddle.  The writing surface would commonly have some sort of lesson printed to it, such as to teach children the alphabet.   This is the “book” of the “hornbook.”

The final touch, the “horn” part, came by use of a thin layer of “cow’s horn” (it could be a horn from another animal) carefully applied by a special process. The thin layer of horn protected the paper from dirt, tears, and scratches.

There was no fixed size for a hornbook.  But, like your average iPad screen, there was a basic size, one that could fit in a child’s hand. 3” x 6” or so would be a normal size. Cheaper hornbooks could be mass produced with each student able to have one for a low price.

Like your phone, hornbooks came in various varieties.  They could be quite elaborate and used as status symbols.  Show-offs have always been with us.

A variety of substances could be used to construct a hornbook.  Hornbooks were made of silver, bone, leather, or stone as well as wood. The text and pictures could also be engraved into the wood (or whatever the hornbook was made of)  itself.

A hornbook might even be made out of something edible, particularly as a special treat.  Gingerbread hornbooks were popular.  For instance, if you learned a letter, you might be able to eat it.  Matthew Prior, an English poet, once mentioned such educational treats:

One German educator was reportedly so excited about this “gingerbread” method of teaching that he suggested that each school should hire its own baker.  Is anyone else hungry?

As paper became cheaper, hornbooks started to be replaced by “battledores.”

Battledore was an early form of badminton played by using a wooden paddle.  The name was given to a writing tablet made of paper or cardboard.  They were first made in the mid-1700s and used into the mid-1800s.  The basic concept still is around even today.

Battledores were often larger and more flexible than hornbooks, able to be bent into three parts.  This allowed more text and pictures to be printed on them and to provide more complex lessons.  A battledore might have a short fable or Bible story, for instance.

What would be printed on the average hornbook?  Children were traditionally taught how to read first before being taught to write.  So, teaching them their letters was the first step.  And, though hornbooks could be used for other things, they were usually used to teach reading.

The basic “lesson” comes in three parts.  There is the alphabet, both upper and lower case.  There is a phonetics or “syllabary” lesson to teach how to pronounce words.

And, there is a basic prayer (Our Father).  The hornbook also might have some other prayer, basic religious lesson (such as about the Holy Trinity), or biblical verse.

Remember, education was often for religious reasons.  In England and colonial times, the religious lesson would be more likely to be based on the teachings of the Church of England.  Then, a small, red cross (in honor of England) was often included in the upper left hand corner of the hornbook.

The text could be altered to fit the religion of the intended audience.  It also might be less religious, more secular, as desired.  In time, especially in the United States with a diverse range of religious faiths, a special sectarian message would be less appropriate for many schools.

A children’s primer in book form allowed more detailed lessons.  These primers could provide a more detailed ideological message, such as using royal (such as “K” is for “King”) or American (“G” is for “George Washington”) themes when teaching the alphabet.

But, even the simple hornbook provided a means to teach basic religious or other lessons while teaching a child the basics of reading.

This photo of a battledore has the same basic concepts.  The extra space and ability to divide the pages allows more material to be provided in an organized fashion.  The battledore there has a short story, word lists, the alphabet out of order to help learning, and illustrations.

Word Fun: You might be familiar with the term “hornbook law.” The term is related to a child’s hornbook. If something is said to be “hornbook law,” it is based on simple principles of law.  It is often said with a bit of sarcasm, “that’s hornbook law, duh!”  Lawyers can be snarky.

The 21 Century allows even toddlers to play with and learn from computerized devices.

But, the basics still have to be learned.  A child might be taught reading and writing at the same time today.  They still have to start with their alphabet, move on to pronouncing words, and often are taught basic prayers and such as well.  With their 21st Century “hornbooks.”