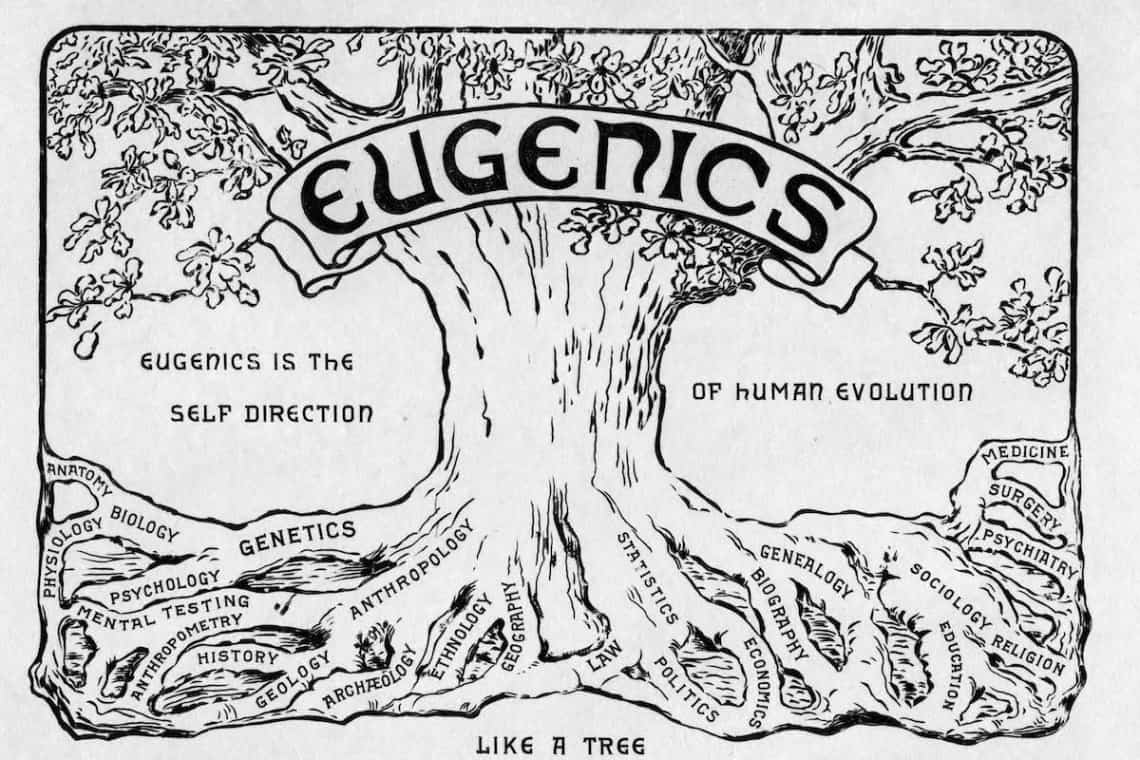 Buck v. Bell (1927) was a Supreme Court opinion that upheld the power of the government to forcibly sterilize people as part of a eugenics movement.  Public safety justifies limiting control of one’s body.  It also rejected the notion that forced sterilization would be applied unfairly.

The scientific theories of Charles Darwin in the mid-19th Century are widely accepted today in science classes.  Darwin’s theory of evolution, however, had a darker side.  People spoke of “social Darwinism” in which a survival of the fittest occurred in human society.  And, some wanted to do more: to forcibly sterilize people who were deemed “unfit” to have children.

Charles Darwin discovered that life slowly developed, evolved, over a long period of time from the most simple organisms to humans themselves.  A process called “natural selection” was involved in which certain species lived on, reproduced, while others died out.  This “survival of the fittest” again occurred over a very long time, millions of years, billions of years in fact.

Darwin’s cousin, Francis Galton, argued for a much more direct and immediate approach that he called “eugenics.” The word is from Greek — a common source of scientific-sounding words — meaning “good genes.”  Galton argued

“What Nature does blindly, slowly, and ruthlessly, man may do providentially, quickly, and kindly.”

Eugenics seemed to be an ideal approach to further the advancement of human society.  Animal breeding has worked well since ancient times, no?  Why not apply this to humans?  This now seems like the plot of a scary sci fi novel, but it all seemed progressive to many at the time.  It was seen by many as a humane and scientific approach for human betterment.

Certain humans seemed particularly unfit.  Some had certain clear disabilities such as epileptics.  Society had a duty to care for such individuals, including in institutions established particularly to address their needs.  Eugenics could be used to reduce their number.

Others were more vaguely unfit, such as those deemed “feeble-minded” or “poor white trash.”  Such traits would dangerously pass on to children.  We now know that the science allegedly behind such ideas was poorly understood, genetics much more complicated.  But, some were quite sure about how certain human traits passed from parent to child.

Would it not be best for society to — at least in these cases — require people not to reproduce?  To sterilize them like you would a cat?  For their own good.  For society’s own good.

Laws began to be passed to do so.  One in Virginia gave state hospitals the authority to provide inmates “such moral, medical and surgical treatment” deemed proper.  Including sterilization.

Opposition to Eugenics and Forced Sterilization

Some people were wary about eugenics, especially when it led to laws that gave the government-wide powers to forcibly sterilize people.

The science was criticized.  And, a range of legal arguments was also raised against the practice.  And, many courts took them seriously.

For instance, forced sterilization seemed to be an illegitimate “cruel and unusual punishment,” which is barred by the Eighth Amendment of the Constitution.  People were also worried that the government would single out certain “classes” of individuals in an unfair way.  And, others argued that the procedure used to pick and choose was unfair.  A “due process” problem.

Such arguments already had made the Virginia law possibly problematic. Therefore, it was determined that a “test case” would be used to show the law was appropriate.

The Case of Carrie Buck

A young woman, Carrie Buck, was chosen to test the law.  Carrie seemed a perfect choice though history has shown that she was the victim of a grave injustice.

She and her mother were deemed feeble-minded and put in a state institution.  Thus, Carrie Buck was eligible to be sterilized under the Virginia law, and her case could be carefully handled, due process-wise.  The superintendent of the Virginia State Colony for Epileptics and Feebleminded, a position ultimately held by Dr. John Bell, saw it as quite promising.

Also, Carrie Buck became pregnant at seventeen.  She was actually raped by a relative of her foster parents, but the pregnancy just seemed to reaffirm the need to sterilize her.  In fact, observation seemed to suggest her child was feeble-minded too.

A guardian was assigned to Carrie Buck to protect her legal interests.  But, he was actually working with the Virginia State Colony for Epileptics and Feebleminded to help defend the law.  He was a member of the governing board of the institution and a supporter of eugenics.

The inherent right of mankind to go through life without mutilation of organs of generation needs no constitutional declaration.

Nonetheless, her legal guardian made three arguments.  He argued Carrie Buck was denied a proper procedure.  Sterilization as a method overall would be unjust, since we have a basic right to control our bodies. Also, the law violated equal protection by only being applied to institutions.  Finally, it was a form of cruel and unusual punishment.

The Supreme Court, in a 8-1 opinion, rejected these arguments.  The law was not “cruel” at all.  If anything, it was a benign public health measure!

Justice Holmes is now infamous for how strongly he praised the law as a positive public policy.  “We require vaccinations; why not sterilizations?  Better to sterilize “instead of waiting to execute degenerate offspring for crime.”   Holmes was known for his pithy turn of phrase.

According to Homes Carrie Buck was not denied a proper procedure; the law carefully protected her rights.

And, it was quite reasonable to focus on inmates in state institutions.  The state reasonably could decide someone is fit for an institution and then provide a means to make it safe to live on their own.  The law in that way applies to everyone.  The claim of inequality was ridiculed.

The one justice who dissented, a conservative Catholic, did not write an opinion.

Carrie Buck was eventually sterilized and released from the state institution where she was residing.  She lived a long life — dying in the 1980s — marrying and showing herself to be a quite worthwhile member of society.  Vivian Buck, her daughter, died at a young age.  She too is now known to not have been “feeble-minded.”

Justice Oliver Wendell Holmes in his Buck v. Bell opinion infamously spoke of “three generations” of “imbeciles,” using the scientific term for people of a low intelligence.  But, none of the Bells in fact deserved that label.  It underlines the problems of eugenics.

The science of eugenics soon became disfavored, especially when the evils of Nazi Germany, which looked at U.S. practice as a model, became well known.  But, Buck v. Bell itself was never overruled.  For instance, Roe v. Wade (abortion rights) cited it as still good law.

Skinner v. Oklahoma (1942) later did take a more careful look, applying a more wary eye on laws that so seriously interfered with such basic civil rights.

Carrie Buck was one of the thousands sterilized largely because they were members of a powerless group.  A fair process could have protected her, even if (which would still be controversial) non-consensual sterilization is left open in narrow cases.

Buck v. Bell remains as a warning of good intentions gone horribly wrong.  For further reading on this topic, a reliable book to try is Imbeciles: The Supreme Court, American Eugenics, and the Sterilization of Carrie Buck. Click here for a summary.

Click here for a PDF copy of this article.