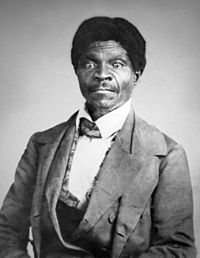 The constitutional ban of slavery and rules for equal citizenship were significantly a result of a Supreme Court ruling later deemed a “self-inflicted wound.”

Over the years, certain states banned slavery, slavery before the Civil War seen as largely a state matter. But, the federal government still had a role to play, particularly when dealing with federal territories.  Would slavery be allowed there?

A compromise developed: slavery would be barred in northern territory and allowed in others.  In 1820, a specific line of latitude was drawn to enforce this rule, while the state of Missouri (above it) was accepted as a slave state. This was the “Missouri Compromise,” but the divisions over slavery were far from over.

Dred Scott was a middle-aged slave when he and his wife (with two children) sued for their freedom in 1840s Missouri. Their argument was that their previous owner (who had died a few years before) took them into free soil, both territory covered by the Missouri Compromise and a free state.  Following previous precedent, it was a promising case, but unfortunately for them, the battle over slavery was getting more divisive.  Both sides took positions tougher than they had earlier. The Missouri Supreme Court, by split decision, changed its policy: once a slave is taken back to Missouri, its rules apply.  Slavery in effect “reattaches.”

The Scotts now took advantage of the power of the Supreme Court to decide cases by citizens in different states.  They were legally under control of John Sanford (the case title a typo), the brother of the widow of their old owner.  Sanford was living in New York while the Scotts were in Missouri. So, the Scotts used what is called diversity of citizenship to bring the case into federal court.

But, in response, Sanford not only denied the Scotts were free, but even argued that they lacked the very right to sue in federal court. Why? A person needed to be a citizen and Sanford argued that a descendant of a black slave could not be one.  This matter divided people at the time though many thought blacks could at least be treated as citizens for the purpose of a federal lawsuit.

The decision was handed down in March 1857, the issues ever more a matter of political dispute, some hoping the Supreme Court would settle the matter.  Chief Justice Roger Taney wrote the opinion for the Court with two justices dissenting.  The ruling increased the divisions over slavery that soon led to the Civil War.

The Scotts lost but were soon freed by their old owner’s spouse (her brother died), now ironically married to an anti-slavery Republican member of Congress.  The Court could have simply held that state law settled things, that is, once a slave is returned to a slave state, it decides their status.  But, it went much further.

First, it held that descendants of slaves (and maybe all blacks, its language on the point loose) simply could not be U.S. citizens, in fact, “had no rights which the white man was bound to respect.” As the dissents note, the text and history of the Constitution did not require such an extreme approach. Likewise, the argument that the Missouri Compromise itself was unconstitutional ignores long practice that accepted that Congress could  ban slavery in federal territories.

Ultimately, slavery was banned by the Thirteenth Amendment, and the Fourteenth Amendment makes clear that any person born or naturalized in the United States is a U.S. citizen.  On the other hand, the debate over territories was not over.