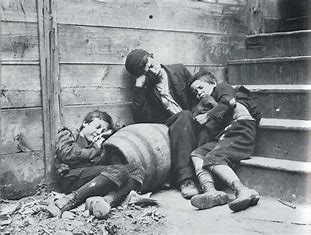 Progressivism is a political philosophy supportive of social reform.  It deals with problems caused by such things as industrialization, urbanization, immigration, and political corruption. The “Progressive Era” in the United States occurred approximately from the 1890s to the 1920s.   Many of its reforms are still with us.

Journalism is a major way to promote the progressive message, often involving highlighting various problems that help show the need for reform.

Reporters who exposed corruption (“muck”) among politicians and elites are sometimes nicknamed “muckrakers.”  Ida Tarbell was one, writing about the power and excesses of Standard Oil.   Jacob Riis wrote How the Other Half Lives about the living conditions of those in poverty.  Upton Sinclair wrote The Jungle, which exposed the meatpacking industry. And, Ida B. Wells-Barnett wrote about the wrongs of lynching, the illegal murders of blacks and other minorities.

Progressives were critical of traditional politics, arguing that it promoted corruption and put too much power in a limited number of political power brokers.  A prime example here was the corruption of “Boss Tweed” in New York.  Some, such as William Jennings Bryan (three-time presidential candidate), used politics to promote progressive causes.  Theodore Roosevelt did as well, later running a third party campaign as a progressive, then nicknamed the “Bull Moose Party.”

One approach was to provide more power to the individual voter, including “direct election,” which allowed the voter to choose officials.  This led to the Seventeenth Amendment, which gave voters, not state legislators, the power to elect U.S. senators.  Many thought state legislatures were often too controlled by the rich and powerful when nominating senators.  This way also was more democratic.

Another approach that is still used in various places is the power of “recall,” which would allow in certain cases the people to remove government officials from power.   This might be used to remove judges except for federal judges, protected by life tenure, only removable by impeachment. Others were concerned this would threaten independence, especially of the judiciary.

Urbanization, the growth of cities, led to many problems that were harder to address than in traditional smaller communities.  This included a great influx of immigrants, who needed to adapt to a new society.    Progressives, often with more of a role opening for women to take part, provided many approaches to deal with such issues including public education, a free means to train future adult citizens.

The settlement house movement involved organizations that provided support services to the urban poor.  Jane Addams, for instance, established the Hull House in Chicago.  The public work of women like Addams also furthered the push for women’s suffrage (voting), leading to the Nineteenth Amendment.

Progressives promoted various economic reforms, including regulations to assist workers and an income tax.  The income tax was seen as a fairer means to obtain taxes and provide funding for progressive causes.  It was authorized by the Sixteenth Amendment. Various court opinions, such as Lochner v. New York (striking down a maximum hour law for bakers), made this effort harder.

National legislation also was passed to regulate the economy overall. For instance, the Federal Reserve Act created the modern banking system. The Sherman Antitrust Act and its successors also regulated monopolies, businesses that had so much power that they controlled a particular industry. Such policies were predecessors to more expansive New Deal policies.

Continue Reading
link to Can You be a Christian and Buddhist?

Buddhism and Christianity both have a range of gratly debated doctrines.  Buddhism is a religion based on Buddha’s teaching on how to live a happy life and obtain enlightenment.  Christianity...