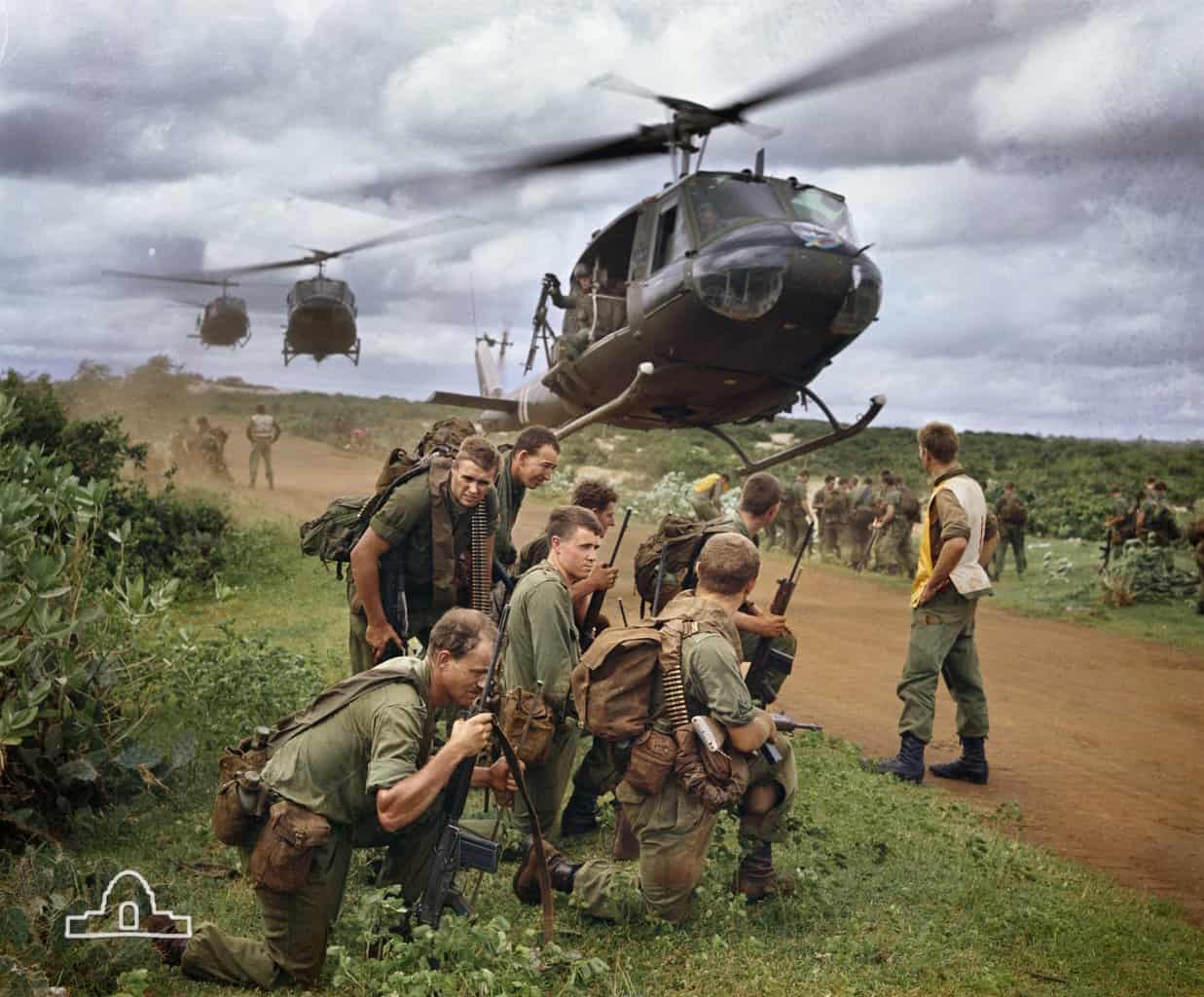 After WWII, a war was fought when the division of Korea — North Korea controlled by communists and South Korea by a government friendly to the U.S. — was threatened.  The same occurred in Vietnam, but with a different ending.

When WWII started, the French controlled Indochina, the area now Vietnam, Laos and Cambodia.  During the war, the Japanese took control of the area, but the French planned to take control back afterwards.

Before the French could do so, rebels led by the communist leader Ho Chi Minh declared Vietnamese independence.  His soldiers were known as the Viet Minh and believed their side was a form of self-government against unjust colonial forces.

The French resisted with support of anti-communist Vietnamese, a civil war arising that became part of the global Cold War.

The United States sent aid to the French, an early application of the “domino theory” in which it was feared that if one area fell to communism, others might follow.  After a bloody conflict, an agreement was reached to break apart French Indochina, including dividing Vietnam itself.

But, an election was scheduled in 1956 to determine control.

The leadership in South Vietnam, with the support of the United States, refused to take part in such an election.  The two regions had long-time divisions and the international fight over communism complicated things as well.  Once the French left, civil war continued, with Viet Cong forces allied with the North Vietnamese present in South Vietnam. The U.S. gave South Vietnam political and military support, including a growing number of military advisors.

Domestic instability and military losses led to a coup in South Vietnam with support of the U.S.  The leader Ngo Dinh Diem was assassinated in the process.

In 1964, there was a report that the North Vietnamese attacked U.S. ships at the Gulf Of Tonkin.  This later was deemed a mistake, but at the time, it led to the Gulf of Tonkin Resolution that authorized broad authority to President Johnson to respond to communist aggression.

This led to escalation of United States military involvement, including a great influx of soldiers and bombings.

At first, there was wide support in the United States for what was seen as a just battle against communism.  General Westmoreland led the U.S. troops, who to many seemed to be fighting the good fight, likely to win as in WWII and Korea.

In time, as the war appeared to be an extended quagmire, and many innocent people seemed to be hurt, there was strong opposition.

One reason for the opposition was a military draft in place meant a “tour of duty” in the combat zone often involved those forced to be there.

Those in support of the military conflict known as “hawks” while opponents were “doves.” A major North Korean military campaign in 1968, the Tet Offensive,  led many more Americans to feel the war was unwinnable.

A study was made, later called the Pentagon Papers, a sort of warts and all account of the conflict.  It makes clear that the U.S. involvement, back in the days of the French-Indochina War, had many problems.

The U.S. government was not honest with the American people about them, which along with other problems such as civil rights, increased cynicism and distrust.

The Nixon Administration determined the U.S. needed to withdraw from the conflict, a ceasefire was negotiated in 1973.  South Vietnam’s resistance collapsed, and the capital (Saigon) fell in 1975.  Vietnam was united, under communist control.

I'm always looking for different ways to review content in my history class. After completing a unit, such as the Vietnam War, a puzzle is always a fun method to assess student knowledge of the...

The Cold War encompasses 45 years of events; that's a LOT! The unit involves every corner of the globe. There are civil wars, proxy wars, lots of terminology, arms races and space races, military and...