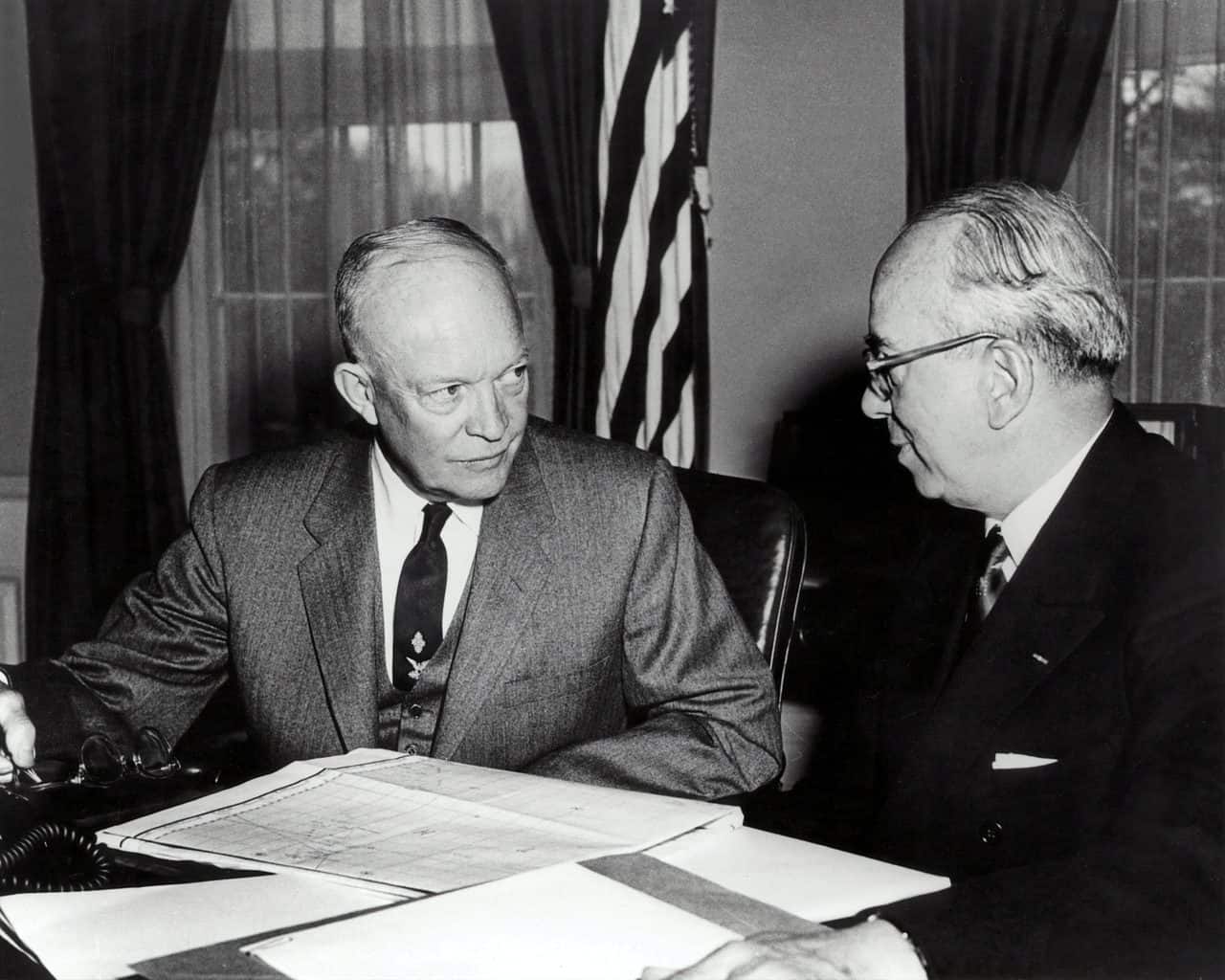 Below is a summary of the Eisenhower Administration. It is available to download as a PDF copy for yourself. If you need a digital copy there is a Google link provided as well.

Dwight Eisenhower had a long military career in various roles, even going back after a short break when requested by President Truman.  “Ike” seemed a good fit to many to follow Truman, dealing with various issues during the Cold War.

Dwight Eisenhower was born in Texas in 1890 though early on his family moved to Kansas.  At an early age, he had the nickname “Ike,” which stuck.  His mother was a religious pacifist, but Eisenhower grew to have a deep interest in the military.  He won a spot at the U.S. Military Academy at West Point, but World War I was over before Eisenhower had a chance to serve in Europe.

He would serve in the military for the next thirty years. Eisenhower became an expert on the use of tanks. He also had a chance to serve under various prestigious generals, including GeneralDouglas MacArthur, U.S. Army chief of staff, serving in the Philippines.  Eisenhower became a general himself during World War II, serving in various major battles.

He ultimately was appointed supreme commander in charge of the forces in Europe, there to accept the formal surrender of Germany.  Eisenhower retired after the war in 1948, becoming a college president.  President Truman, however, a couple years later asked him to take command of the new North Atlantic Treaty Organization (NATO) forces in Europe.

Dwight Eisenhower was an attractive choice for presidential candidate, serving a long time in a non-partisan role; in fact, both the Democrats and Republicans thought he might choose to run under their banner.  Eisenhower, under a slogan of “We Like Ike,” ran as a Republican with a more partisan figure, Senator Richard Nixon, as his running mate.  Ike came off as a fatherly figure, a safe choice.

When Eisenhower came into office in 1953, an immediate problem to handle was the ending of the Korean War.  He negotiated the end of the war, resulting in a North (communist) and South Korea (non-communist) that remains to this day.

Eisenhower resisted the use of military force. He did pledge to use force and provide financial support as necessary to stop the spread of communism (Eisenhower Doctrine).  He also authorized the Central Intelligence Agency (CIA) to secretly support anti-communist efforts world-wide.  Eisenhower also supported the South Vietnemese government against communists, starting the United States on a path that would lead to the Vietnam War.

An important domestic policy during the Eisenhower years had an important military function: our interstate highway system had major economic and social effects, but also provided an organized system for military travel.  Eisenhower also accepted the big changes of the New Deal, so they did not go away with a new party in power.  Alaska and Hawaii also became states during his presidency.

Brown v. Board of Education, which held unconstitutional separation of the races in public schools, was handed down in 1954.  Racial equality not only was important for civil rights, but also a message to the world of the justice of the American system.  Eisenhower saw racial equality as a foreign policy issue.  Many in the South, however, resisted desegregation.  President Eisenhower supported the use of federal troops to enforce desegregation in Little Rock, Arkansas.

Eisenhower won re-election in 1956, but Nixon lost a close race to win a chance to follow him. President Eisenhower used his final speech to warn of a “military-industrial complex,” concerned about the power of big business and the military combining forces.   Eisenhower’s health problems during his presidency was a factor that led to the passage of the Twenty-Fifth Amendment to deal with such issues.  Eisenhower himself lived on in retirement until 1969.

link to The Real Wilma Flintstone: What Did Cavewomen Do?

Caves were used for shelter before humans even existed.  “Cave people,” however, usually is a term applied to Neanderthals and Cro-Magnon humans.  They lived a LONG time ago, before...

Continue Reading
link to Critical Race Theory Principles: Why is it Controversial to Teach?

Why is everyone so concerned about something called “Critical Race Theory”?  What is the controversy over teaching it in schools?  After all, history is rather boring. Things...