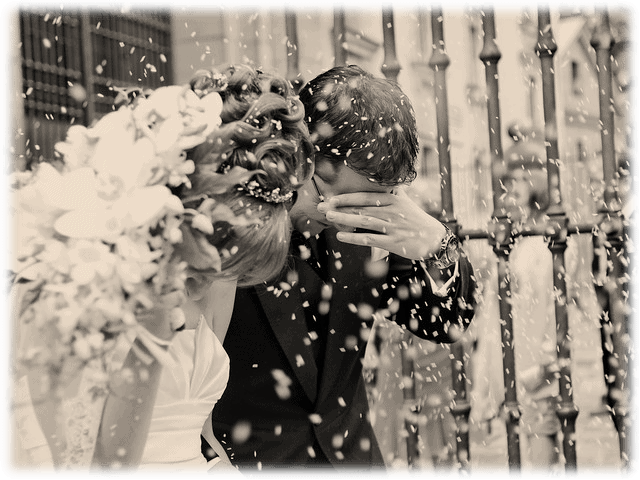 Marriage is an important social institution in the history of the United States. Marriage ages fluctuated over time but roughly were the same with a median age of the early twenties (women marrying a bit earlier).  Marriage as an institution underwent many changes including an increasingly equal role for women and more allowance for divorce.

Britain was late to the New World game, eventually settling on the Atlantic Coast of the modern United States. The first permanent English colony in America was founded in Jamestown in 1607.  The thirteen colonies were settled over time with Georgia founded last in 1732.

The minimum marriage age was 12 years for females and 14 years for males under English civil law until 1753.  These ages were traditional ages tied to the onset of puberty.

Few actually married that young.  During colonial times, women generally married in their late teens and early twenties. Men married a bit later, often needing to serve out indentured contracts or otherwise wait to obtain a means to afford to be the head of a household.

The New World had more opportunities, providing a chance to marry a few years before the average age in England itself.

For instance, a significant factor in deciding when to marry was assigning land to the oldest son, and there was a lot more free land in the colonies.

There were three basic divisions (New England, Middle Colonies, and Southern), and each had its own specific nuances.  For example, the male/female ratio in New England was a lot more equal than in the Southern colonies, where men outnumbered women by significant numbers.

This affected marriage ages, with women in the South marrying at a younger age.

Divorce was almost never allowed.  Great Britain participated in the Protestant Reformation and Protestants (including Puritans) were somewhat less strict about the ”no divorce” rule than Catholicism.

Divorce was still very much frowned upon.  Various “self-help” alternatives were often used, including living apart, abandonment, and open cases of “living in sin” (adultery).

Another consideration when deciding when or whether to marry was coverture. This was the legal principle that once married, the woman’s legal status was under the control of her husband.  In many ways, a wife was chattel (property) of her husband, much like his horse!

Also, over the 17th Century, the institution of slavery more firmly became into existence in British America.  Slave marriages eventually were not treated legally like non-slave marriages.  Slaves still got married though we know much less about the details.

LEARN MORE ABOUT TEEN LIFE IN THE COLONIES HERE

The average age of marriage for middle and upper-class whites in the 1700s was 22 for women and 26 for men. Marriage was an important social and financial decision and was likely truly to “death due us part.”  Poorer whites (and slaves) often married younger.

The British Parliament passed the Clandestine Marriages Act during this period.  This law gave parents of children under twenty-one the power to veto marriages.

The law was the first time there was a statutory requirement for a formal marriage ceremony. It showed the increasing power of the secular (non-religious) government over an area traditionally a church matter.

The colonies soon had serious issues with parliamentary rule. They declared their independence in 1776 and obtained it permanently a few years later. A lot of changes occurred in British America in the 1700s, including a great expansion of territory after the French and Indian War.

Abigail Adams asked her husband to keep in mind the needs of the ladies as he took part in drawing up laws for the new United States government. John Adams laughed the request off. Abigail knew independence and its ideals, including equality, self-government, and a rapidly growing new nation, would affect women (including marriage) in many ways.

One significant way this affected marriage was a change in inheritance rules. The traditional rule was that the oldest son received the land, encouraging other sons toward other careers such as the military.

The youngest children might just be out of luck.

The United States now favored equal inheritance shares, which gave more options to other sons and daughters too.

This would naturally affect marriage choices as well.  For instance, some land would allow a settled marriage life unlike if a husband was in the military.

Marriage as a Metaphor

Marriage was also promoted as a consensual union.  Marriage was seen as a metaphor for republican government.  People freely choose their leaders just like men and women freely married.

Both marriage and republican government also included an understanding that benefits include responsibilities.  Marriage (private) and government (public) had that connection.

Marriage was also seen as an important part of liberty.  Marriage was a personal choice that the state should not invade.  The British threatened private life in various ways, leading to the Third and Fourth Amendments of the Constitution to help protect the privacy of the home.

Wives and mothers also were seen as important parts of the next generation. The concept of “republican motherhood” developed.

Women had an important role in raising children to be good citizens.  This opened up a path for women’s involvement in reform movements.

The U.S. Census began to regularly set forth data on the median age of the first marriage for men and women in 1890. The median age for women was 22 and men married at 26. The average age of marriage roughly speaking was constant over hundreds of years.

The idea that “people married young in the past” is something of a myth though it is true in certain cases.  Marriage changed more in other ways, including in the 19th Century.

A major development was the passage of married women’s property acts, which allowed married women to have more control over their property.

This began the decline of the principle of coverture though limits on married women’s economic equality (including basic acts like getting a credit card) would continue as late as the 1970s.  Some might say until this very day.

Such laws helped to begin the women in the slow development of an easier means to obtain a divorce from their husbands.  There were also some “free love” movements, which supported purely consensual unions. Divorce continued to be rare, and unmarried sexual relations (at least legally) continued to be forbidden.

The end of slavery with the passage of the Thirteenth Amendment also was a very important moment in the history of marriage in America.

A basic wrong of slavery was the inability of slaves to have control over their family life, including choices over marriage and having children.

Nonetheless, the lingering effects of slavery continued with the Supreme Court only ending state laws against interracial marriage in Loving v. Virginia (1967).

In the early 20th Century, the median age for men was about 25 and for women about 22. Prosperity after World War 2 led these ages to drop a couple of years until 1980. A combination of changing economic conditions and relationship norms led to an increase in the marriage age. By the end of the century, men on average married at 27 and women at 25.

The relative stability of the marriage age is strikingly shown by it being fairly steady, even in the economic troubles of the Great Depression.

The 1950s and the “Baby Boomer” age, therefore, is a particularly notable period in the history of family life in the United States.

After years of depression and war encouraged a delay of gratification, people married younger for an extended period of years.

A “cult of domesticity” arose in which marriage and family life became particularly important in American culture.  The first television programs often portrayed a stereotypical view of young wives (usually white) and mothers at home and husbands working in white-collar type jobs.

Their children, however, had the means to wait to get married, including with cheap college tuition and sexual norms accepting relationships before marriage.

The Last Few Decades of the Century Bring Big Change

The decline of economic prosperity in the 1970s also encouraged more people to wait to get married.

Marriage underwent many changes in the 20th Century. The grounds for divorce expanded, becoming more and more a matter of personal choice.

Marriage also became more of a union of equals, including efforts to address marital abuse.  A major milestone here was the end of the spousal rape exception in New York in the 1980s.

The sexual revolution also brought more open acceptance of relationships before marriage.  Such relationships surely occurred in the past, but they were now more socially and legally accepted.  Griswold v. Connecticut (1964) protecting a right to birth control was an important milestone here.  Gay rights were also slowly accepted.

I found a book about weddings published in 1973 entitled The Eternal Bliss Machine by Marcia Seligson.  The basics remain very familiar. There is even a section about same-sex weddings, which now are recognized as constitutionally protected.

The wedding pages in newspapers are more diverse, not only by ethnicity and race but now by gender.  Same-sex marriages are a lot less novel though not fully accepted.

Lingering inequalities between the sexes (bride and groom) improved though some still remain.  And, the Supreme Court in Lawrence v. Texas (2003) held that sexual relationships among the unmarried are constitutionally protected.

A basic difference being people are getting married older these days.  There are various reasons this is so, including current economic conditions, cultural norms making it more accepting, more options for women, and a general delay of full adulthood.

Childhood and early adulthood are longer these days, just as life spans are longer.  Marriage is pushed back too

The median marriage age is older these days, but hundreds of years ago, many people first married in their late 20s.  As marriage changed over the years, some basic things stayed the same.  Two people came together for a variety of reasons to join together to make a life together.  Various things changed over the years, including the exact roles of each spouse.  Marriage probably is still changing in various ways.  There still is that core consistency.

Lesson Ideas for This Reading Passage

1. Students can create a timeline of the history of marriage, identifying important milestones.

2. In groups, scaffold the reading by having each group member read a portion of the article, then discuss and share to create a bullet-point summary of important events.

3. Hold a fishbowl discussion analyzing which legislation was the most important and why.