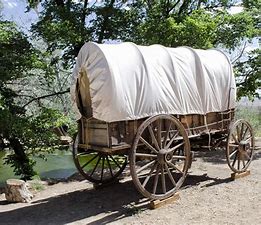 This Westward Expansion quiz consists of 10 document-based multiple-choice questions. You can expand it into a full test with a few writing prompts such as:

For a copy of this quiz, scroll to the bottom of the page and click the multi-colored button. It includes a link to a Google Forms version of the quiz.

1. The first sentence refers to America as “the nation of many nations”. This refers to

1.     The diverse population of immigrants

2.     The secession  of the southern states prior to the Civil War

4.      The magnificent domain of space and time

2. According to the document why must America expand?

1.To make space for the increasing population

2.To allow different cultures to have their own space

3.To avoid the Native Americans

4.To fulfill our mission of spreading civil freedoms

3. The document states that the idea of manifest destiny was approved by

1.The king of England

4. By studying the photograph you can assume that

1.Some slaves settled out west

4.The porch of the home is built flimsily

5. Using your knowledge of social studies the house in the photograph

1.Was probably built by the owners

2.Was a multi-family home

6. The railway tried to attract passengers by

2.Promoting it as a safer way to travel

3.Describing it as a luxury rider

2.Had its last stop in New York

3.Included only one route

4.Was built quickly by Irish immigrants

8. In order to take advantage of the homestead act you

3.A minimum of 21, a citizen and not an enemy of the nation

9. The purpose of the Homestead Act was to

1.give citizens a chance at a better life

2.lower the population in the cities

4.Encourage settlement of the west

10. The maximum allocation of land for homesteaders was

OTHER QUIZZES AND EXAMS: