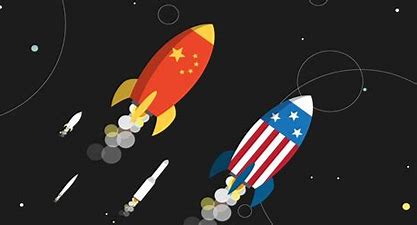 1) The political policies of the Soviet Union traditionally emphasized the

2) Which is generally a characteristic of a communist economy?

4.           entrepreneurs sell shares in their companies to the government

3.           the Soviet Union used military and diplomatic pressures to install their governments

4.           members of the Communist party won free elections in these nations

6) During the Cold War Era (1945-1990), the United States and the Soviet Union were reluctant to become involved in direct military conflict mainly because of

7) After World War II, the Soviet Union established satellites in Eastern Europe to

8) In the Soviet Union, a negative aspect of the Cold War Era was the

9) “From Stetin in the Baltic to Trieste in the Adriatic, an Iron Curtain has descended across the continent. Behind that line lie all the capitals of the ancient states of Central and Eastern Europe. Warsaw, Berlin, Prague, Vienna, Budapest, Belgrade, Bucharest and Sofia, all these famous cities and the populations around them lie in what I might call the Soviet Sphere, and all are subject, in one form or another, not only to Soviet influence, but to very high, and in some cases increasing measure of control from Moscow.”

What is the main idea of this quotation?

1.           The Soviet Union has expanded its influence throughout Eastern Europe

2.           The Soviet Union has helped the Eastern Europe improve their standard of living

3.           The democratic nations of Western Europe have stopped the expansion of Soviet influence in the world

4.           The Soviet Union will support communist revolutions in Southeast Asia

10) Prior to the 1980’s, the emphasis of the Five-Year Plans in the Soviet Union was on heavy industry. One result was the

11) Which was a major reason for the success of Soviet domination in Eastern Europe after World War II?

3.           the Soviet Union had military forces in Eastern Europe as a result of World War II

These historical newspaper headlines were related to

4.           attempts by the Soviet Union to strengthen communist control

17) Which is a major reason Cuban revolutionary movements were attracted to communism?

2.           business owners and the military were supported by communist groups

1.           ensure that food reached areas of the Korean Peninsula affected by famine

2.           prevent North Korea from conquering the people of South Korea

4.           restore peace between warring factions of Buddhism and Shinto

What does this list of events suggest about the Cold War Era?

1.           throughout the period, the United States and the Soviet Union were reluctant to solve conflicts

2.           the level of tension between the United States and the Soviet Union varied

3.           economics played a key role in causing conflict between the United States and the Soviet Union

4.           the United Nations was instrumental in reducing tensions between the United States and the Soviet Union

20) Which statement would be consistent with the views of Fidel Castro?

1.           The spread of communism is the greatest danger facing Latin America

2.           An American military presence is the key to the defense of Latin America

3.           Progress and justice in Latin America can only be achieved through revolutionary socialism

4.           Introducing a free-market system will improve the economies of Latin American nations

21) Which headline concerning the Soviet Union refers to a Cold War event?

23) During the 1980’s, the Soviet Union experimented with modifications of its command economy by

24) In the 30 years after World War II, which area was most influenced by the Soviet Union?

25) Which statement best describes the political situation in Eastern Europe during the 1980’s?

3.           ethnic rivalries have been eliminated throughout the region

4.           United States influence has been used to keep communist governments in power

27) During the 1980’s in the Soviet Union, a major element of the economic policy of Perestroika was

· Operation of the Berlin Airlift

· Organization of the Warsaw Pact

· Construction of the Berlin Wall

These events of the Cold War are examples of

1.           efforts to prevent military conflict between the superpowers

2.           situations that increased tensions between communist and democratic nations in Europe

3.           attempts to weaken the Soviet Union’s control of its Eastern European allies

29) The threat of nuclear was obvious in the Cuban missile crisis of 1962. This excerpt, from President John F. Kennedy’s speech to the American people, explains the U.S. position. . . .

We have unmistakable evidence that a series of offensive missile sites is now being built on that island. . . . Cuba has been made into an important strategic base by the presence of these long-range offensive weapons of sudden mass destruction. This is an open threat to the peace and security of all of the Americas. Our objective must be to prevent the use of these missiles against this or any other country. We must secure their withdrawal from the Western Hemisphere. . . . I call upon Chairman Khrushchev to halt and eliminate this secret and reckless threat to world peace.

30) The Soviet Union responded to NATO by creating its alliance, the Warsaw Pact.

How do these “satellites” in the Warsaw Pact provide a buffer for the Soviet Union?

31) This is an excerpt from the North Atlantic Treaty, which was signed by the United States, Canada, and ten nations of Western Europe in 1948.

be considered as an attack against them all. They agree that if such an armed attack occurs, each of them

will assist the party or parties so attacked. Each will immediately take whatever action it considers

necessary to restore and maintain the security of the North Atlantic area. It will, if necessary, use armed

What is the purpose of NATO?

32)After Kennedy ordered a blockade of all offensive military equipment being sent into Cuba, Premier Khrushchev responded with this message:

“Mr. President, the Soviet government decided to help Cuba with means of defense against outside attack. These weapons were only meant for defensive purposes. We have supplied them to prevent aggression against Cuba … With respect and confidence I accept the statement you set forth in your message of October 27, 1962. You said then that Cuba will not be attacked or invaded by any country of the Western Hemisphere … We have given the order to discontinue building the installations. We shall dismantle them and withdraw them to the Soviet Union.”

How does Khrushchev explain why missiles were placed in Cuba?

Why did Khrushchev believe the missiles could now be removed?